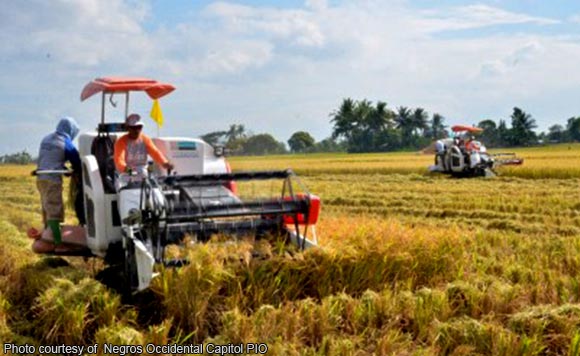 0 283
Share
Want more POLITIKO News? Get the latest newsfeed here. We publish dozens and dozens of politics-only news stories every hour. Click here to get to know more about your politiko - from trivial to crucial. it's our commitment to tell their stories. We follow your favorite POLITIKO like they are rockstars. If you are the politiko, always remember, your side is always our story. Read more. Find out more. Get the latest news here before it spreads on social media. Follow and bookmark this link. https://goo.gl/SvY8Kr

Negros Occidental is eyeing a partnership arrangement with the Department of Agriculture for its farm mechanization program in the province.

Provincial Agriculturist Japhet Masculino said they will meet with DA Secretary Emmanuel Piñol, who had been receptive to the proposal.

“We will set another meeting with Secretary Piñol for the sharing arrangements,” Masculino said, adding they are preparing to put the proposal in writing.

Earlier this month, Masculino discussed the matter with Piñol during the distribution of land titles in Sagay City.

According to Masculino, the provincial government will spend an additional P40 million to boost its farm mechanization program.

Under the proposed scheme, the province will have a counterpart of 20 percent.

“If we have P40 million, the remaining 80 percent or P160 million will come from the DA’s Rice Enhancement Program (RCEF),” he said.

The provincial government has been pushing for farm mechanization to help farmers improve productivity and profitability by reducing production costs.

It is also considering farm mechanization as one of the measures to allay the possible adverse effects of the Rice Tariffication law to Negrense farmers.

Last year, the province allocated P25 million for the purchase of farm equipment, but these can cover only “minimal” rice production areas.

Masculino said the target is to fully mechanize the entire rice production areas of the province in three years.