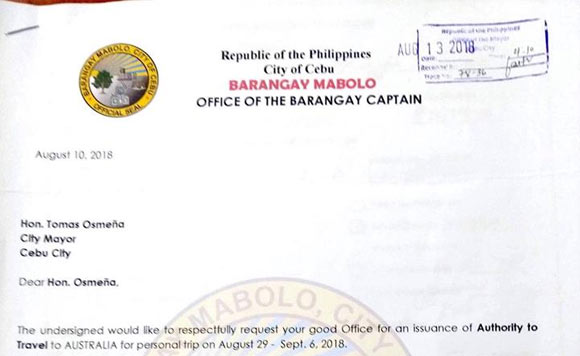 0 854
Share
Want more POLITIKO News? Get the latest newsfeed here. We publish dozens and dozens of politics-only news stories every hour. Click here to get to know more about your politiko - from trivial to crucial. it's our commitment to tell their stories. We follow your favorite POLITIKO like they are rockstars. If you are the politiko, always remember, your side is always our story. Read more. Find out more. Get the latest news here before it spreads on social media. Follow and bookmark this link. https://goo.gl/SvY8Kr

Call him a party pooper, but he’s not gonna let this politiko go MIA every month.

Cebu City Mayor Tommy Osmeña is definitely someone you would never want to cross, and Mabolo Barangay Captain Niña Mabatid is learning the hard way.

Mabatid requested for a travel authority from city hall as she was bound to go on a personal trip to Australia. The travel document is required for government officials and employees.

But Osmeña trampled upon her travel plans as he denied the request, saying Mabatid has been too much of a jetsetter.

“This is your second international trip for the month of August. Despite your walkout, I approved your first trip after the ABC elections. I cannot approve your travel every month,” Osmeña said.

“Be Mabolo’s captain or be a travel escort; you cannot be both.”

Mabatid came under fire earlier this year after causing a scene at a local hotel. She also walked out of the City Council proceedings after she lost the Liga ng mga Barangay elections.

Niña Mamatid,This is your second international trip for the month of August. Despite your walkout, I approved your…

Loren Legarda wants ex-DOH secretaries to come together for…