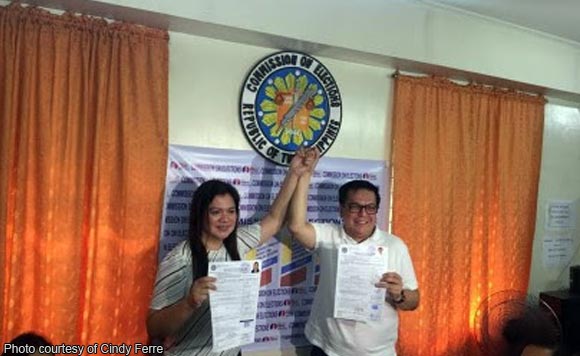 ILOILO CITY — Nacionalista Party (NP) candidates for governor and vice-governor in Iloilo province were the first to file their Certificates of Candidacy (COCs) at the start of the five-day filing period at the Commission on Elections (Comelec) office here Thursday morning.

Rep. Ferjenel Biron of the 4th district of the province is running for governor while Christine Garin is seeking re-election as vice-governor.

A doctor by profession, Biron said he would like to look into the improvement of health services in the province in case he wins in the 2019 elections. He also wants an annual procurement plan for the 12 government-run hospitals in the province.

“That is among the reforms that I will bring,” he said.

Garin first entertained the idea of running as representative of the AAMBIS-Owa Party-list but later decided to seek for re-election. She is the first lady vice-governor of Iloilo.

Biron said his slate for the 2019 mid-term elections is almost complete except for the representative in the third district, which he wanted to be a surprise.

Among the candidates under his slate. who also filed their COCs in the morning, included re-electionists of the 1st district Rep. Richard Garin and board members Renee Valencia and Valentin Serag.

For the 2nd district, Pavia Mayor Michael Gorriceta is running for congressman while for board members are former Leganes town vice-mayor Joseph Allen Espano and Leon town Mayor Rolito Cajilig.

For the 3rd district, running for board members are incumbent Pototan Councilor Paulo Quanco and Lawyer Francisco Pisina who is yet to file his COC.

For the 4th district, 24-year old Braeden John Biron, who is the incumbent mayor of Barotac Nuevo, is running as representative.

The board members who are yet to file their COCs are re-electionist Domingo Oso and former Dumangas Mayor Rolando Distura.

Rep. Raul Tupas, who is seeking re-election for the 5th district, also filed his COC together with board members incumbent Ajuy town councilor Carol Espinosa and Tupas’ brother, Nielito.

Meanwhile, a 31-year-old male who works in a water refilling station decided to challenge Biron when he filed his COC as an independent candidate for governor.

Jonry Gargarita of Barangay Lay-ahan, Pototan, Iloilo said the problems being faced by the country pushed him to run for governor.

“There should be someone to stand for the future generation,” he said.

He said the gubernatorial post will make it easy for him to give the services he want for the province.

Gargarita said he particularly wanted a freeze of the excise tax included in the Tax Reform for Acceleration and Inclusion Law.

The excise tax imposed on fuel has brought burden in the transport groups, especially drivers, he said.

Ausan has been visiting various field offices of Comelec from the city to nearby towns in Iloilo province to check if there are concerns.

“So far, in the six provinces, everything has been well-managed. There have been no reports received of untoward incidents with regards to the filing of COC,” he said.

Ausan hopes that they will be able to maintain the orderly and peaceful conduct of filing of COC in the entire region until October 17, the last day of filing next week.

He added that they have to accept the COC of Gargarita because their field personnel could not declare whether or not a candidate is a nuisance. (PNA)