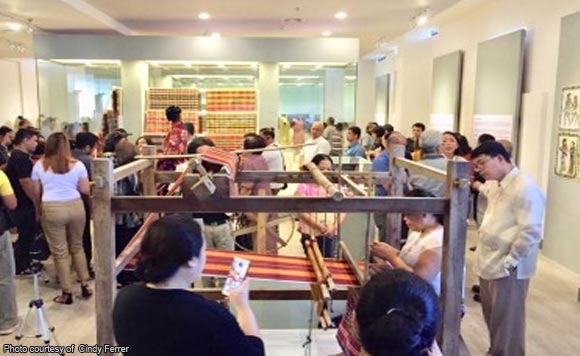 0 494
Share
Want more POLITIKO News? Get the latest newsfeed here. We publish dozens and dozens of politics-only news stories every hour. Click here to get to know more about your politiko - from trivial to crucial. it's our commitment to tell their stories. We follow your favorite POLITIKO like they are rockstars. If you are the politiko, always remember, your side is always our story. Read more. Find out more. Get the latest news here before it spreads on social media. Follow and bookmark this link. https://goo.gl/SvY8Kr

ILOILO CITY — The Western Visayas Regional Museum opened on Saturday a gallery featuring the weaving tradition of the region.

Dubbed “Habol Panay: The Woven Artistry Philippine Textiles”, the exhibit is the first ever gallery unveiled since the converted Old Iloilo Provincial Jail was opened as a regional museum last April in this city.

The gallery is a permanent exhibition that displays to the public the threads, textiles, looms and raw materials used in weaving in Panay. These displays are from the National Ethnographic Collection while some are donated and loaned by partners of the National Museum (NM).

The opening of the exhibit was graced by Angel Bautista, acting assistant Director of the NM and the chief of cultural properties regulation; Governor Arthur Defensor Sr.; former Antique governor Sally Perez; and Antonio Legarda, who represented her daughter, Senator Loren Legarda.

In a media interview, Bautista recognized the outstanding, unique and artistic works of the weavers in Western Visayas that should be showcased to the public and to the generations to come. “This is to showcase our rich intangible cultural heritage that we must be proud of,” he said.

Bautista said Filipinos have already been into the culture of weaving even before the Spanish colonization. “Not only here (in Western Visayas) but the entire country and this has been our common identity that we, Filipinos, are really involved in this culture of weaving,” he added.

He said they already showcased some of the textile heritage of the Philippines to other parts of the country and in the United Kingdom, Portugal, Germany, Spain and the United States of America.

Criselda Monreal, one of the weavers from Miag-ao,Iloilo, demonstrated the process of weaving using a “hablon” loom made of wood and bamboo after the inauguration of the exhibit.

Panay weavers are famous for their artistry using abaca, cotton, pineapple and silkworm, which are cultivated by the farmers in the region.

Meanwhile, Bautista said that they are now conceptualizing all the exhibits this last quarter of the year as they are planning to open them by 2019. The regional museum houses five galleries.

He said that they will prioritize the gallery that will house archaeology because they are bringing in the centerpiece of the exhibit, the “Oton Death Mask” from their vault in Manila.

The death mask is a pre-Hispanic gold mask found in a gravesite in Barangay San Antonio, Oton,Iloilo.

“The galleries for the natural history, plants, animals, especially endemic species found only in Panay will be showcased here,” he said.(PNA)