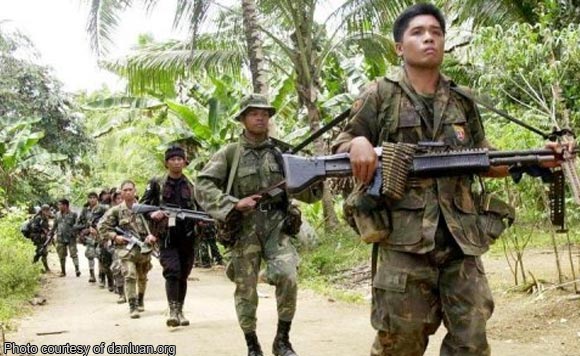 Lt.Col Eufracio Joel Malig Jr., commander of the 47th Infantry Battalion of the Philippine Army, said they could not be complacent with the insurgent-free status of Bohol.

Malig said the 47th IB is now determining the affiliation of some armed individuals- -including women- -spotted in some towns with the NPA or any other terrorist groups.

The military has received reports about armed men spotted in Trinidad, Baclayon and Antequera.

Malig first reported presence of armed individuals in Bohol during the joint meeting of the Provincial Peace and Order Council (PPOC) and Provincial Anti-Drug Abuse Council (PADAC) on June 29.

Malig reported that on July 3, nine men bringing high-powered firearms had been spotted passing the boundary between barangay Caluasan in the town of San Miguel and Isumod River in Sitio Cahayag in barangay Dagohoy in the town of Danao.

The armed men headed towards the sub-village of Maonglinis in barangay Kauswagan in Trinidad town.

On July 12, four men carrying high-powered firearms were spotted in barangay Kauswagan, Trinidad and seen hopping from one house to another in barangay San Vicente, Trinidad.

On July 15, another group of four men and a woman has been spotted near a house in barangay Catigbian, Buenavista and had been seen heading to Purok 5 in the same barangay.

The woman was described to be 5’2” tall and was clad in black jacket.

On the same day, five armed men, on barefoot and bringing big backpacks had been spotted in the sub-village of itio Baclaran in barangay Tawid, Anda and heading barangay Katipunan.

Malig said the military boosted their intelligence network after the report from the Police Regional Office (PRO)-7 in Cebu that 15 to 20 armed men left Guihulngan City on pump boat after the NPA attack in the city.

So far, there has been no report of any armed individual entering the borders of Bohol.

IBGen. Arnulfo Matanguihan, 302nd Brigade commander,Matanguihan, for his part, later said one of the personalities to watch was Domingo Compoc, a 52-year-old native of barangay Dagohoy in Bilar, who was now leading the NPA in Negros and has three standing warrants of arrests for murder and rebellion.

Compoc and his wife, Marilyn Badayos, a native of Cebu, have reportedly been in command of the Negros operation of NPA for around a decade already.

In 2007, Compoc was reported to have been wounded in an encounter with government troops in Bohol.

Matanguihan, however, corrected earlier information leaked by other sources that Compoc had been spotted in Bohol, but said that he has to be watched for his connections here.

Compoc used to be an NPA leader in Bohol during the communist terrorists’ heydays.

Being a native of Bilar and having previously influenced some groups here, Compoc could possibly be tapped to lead the revival attempt of NPA’s strongholds in Bohol.