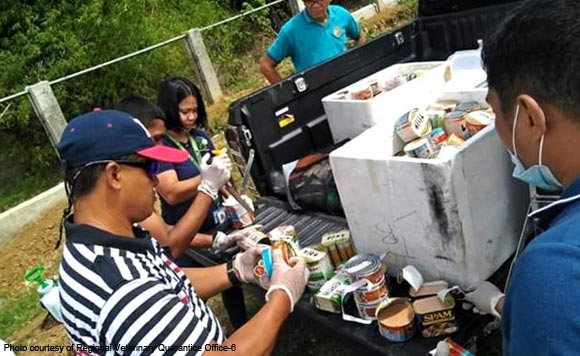 Meat products from countries and territories with cases of African Swine Flu (ASF), including canned meat, were seized in Iloilo and Aklan earlier this week.

In Iloilo, quarantine personnel disposed of the canned goods by burying them at a dumpsite shortly after they were seized last June 4.

The items were seized by authorities at the Iloilo and Kalibo International airports in Panay, the Department of Agriculture’s Regional Veterinary Quarantine Office said.

An initial investigation showed the 244 pieces of raw, processed, and canned meat products were confiscated at the Iloilo International Airport.

These were immediately buried in a dumpsite in Cabatuan town in Iloilo last June 4.

“We were able to confiscate it during the arrival of the international flights and we disposed it in a dumping area in Cabatuan in coordination with the local government unit (LGU), Philippine National Police (PNP), and the Bureau of Customs (BOC). The bulk of the meat products were really canned goods alongside raw meat,” said Dr. John Rhoel Hilario, Regional Veterinary Quarantine Officer.

Hilario said the products came Hong Kong and Singapore, and were brought into the countries by locals and foreigners as “pasalubong.”

According to Hilario, Hong Kong is one of the areas that are experiencing the outbreak.

Meanwhile, in Aklan, 118.45 kilos of meat products were confiscated from several passengers at Kalibo International Airport on Thursday, June 6.

The Kalibo International Airport Station, Office of Aklan Provincial Veterinarian, LGU of Kalibo, and BOC then disposed of the meat products.

Hilario said they are strictly monitoring both the incoming and outgoing meat products that may be infected with the ASF virus.

“Regardless of the size of meat or of the processed meat, as long as it is infected, it still has the capacity to affect an area,” he said.