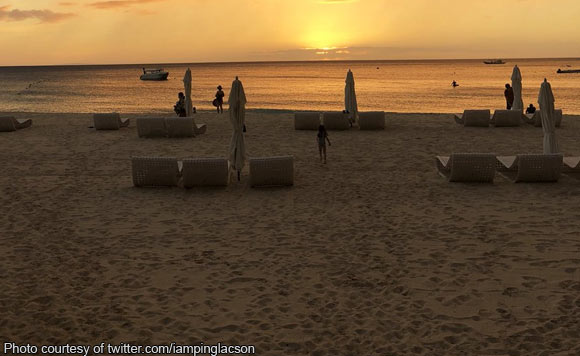 0 715
Share
Want more POLITIKO News? Get the latest newsfeed here. We publish dozens and dozens of politics-only news stories every hour. Click here to get to know more about your politiko - from trivial to crucial. it's our commitment to tell their stories. We follow your favorite POLITIKO like they are rockstars. If you are the politiko, always remember, your side is always our story. Read more. Find out more. Get the latest news here before it spreads on social media. Follow and bookmark this link. https://goo.gl/SvY8Kr

Beautiful Boracay island in Aklan may close on April 26 on an ugly note, no thanks to extortion by local barangay officials there, Sen. Panfilo Lacson said.

On Wednesday night, Lacson cited information reaching him that unscrupulous barangay officials were demanding “hefty sums” in exchange for IDs to non-residents.

“The end of the day will soon be upon beautiful Boracay. As I took this photo last week, I was told that unscrupulous barangay officials have started to demand hefty sums in exchange for issuing ID’s to non residents. Nothing could be uglier,” he said (https://twitter.com/iampinglacson/status/986607381885861888).

Highlighting his point, Lacson included in his tweet a photo of the beauty of Boracay a week before it is to close down on April 26.

The government is closing Boracay to tourists starting April 26, to clean up the island after President Rodrigo Duterte likened it to a “cesspool.”

An ID system has been imposed on the island to allow residents to stay starting April 26.

Under the system, tourists and visitors of Boracay residents are prohibited from entering except in emergency situations.