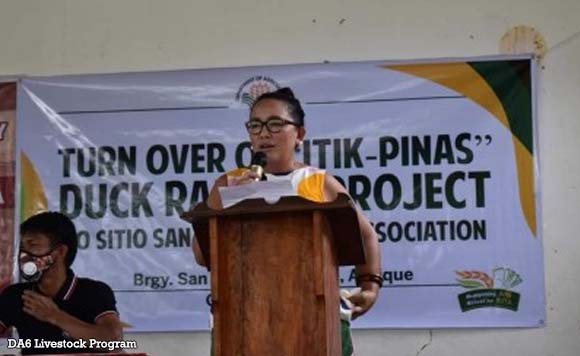 Libertad Mayor Mary Jean Te said they are fortunate to be a recipient of assistance from the Department of Agriculture (DA) under its “Itik-Pinas” project.

“The 1,800 heads of ducks are given for free by the DA to the beneficiaries,” she said in an interview Monday.

Te said these ducks will be raised by the 30 members of the Sitio San Juan Farmers Association (FA) in Barangay San Roque, who belong to the first batch of recipients, so they could produce balut.

During the turnover of the assistance last Oct. 9, each FA member received 60 ducks.

Meanwhile, Te said that with the project, they are envisioning Libertad to soon supply the market in the premier tourist destination of Boracay island in Aklan province.

“As of the current, the balut being sold in Boracay Island still comes from Cuartero, Capiz province,” she said.

Te said their municipality, which is in the northern tip of Antique is near Boracay island.

“Our potential market for balut will be Boracay because of the tourist visitors there who would like to taste it,” she said.

In a separate interview, Antique provincial veterinarian, Dr. Florencio Macuja said they are going to assist the DA personnel in conducting technical training to the FA members so that they would be equipped with knowledge on how to make their project prosper.

“We are ready to provide the needed technical assistance to the beneficiaries,” Macuja said. (PNA)