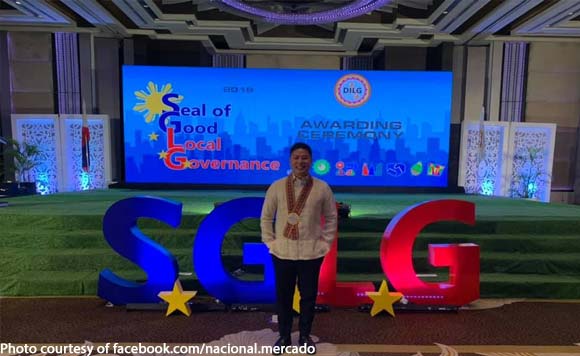 Mayor Nacional Mercado thanked his constituents and fellow officials after Maasin City in Southern Leyte received the Seal of Good Local Governance (SGLG) award from the Department of the Interior and Local Government for the third time.

“This award goes to all Maasinhons and we in the local government unit will continue our best efforts to work hard even when our efforts are already merited as one of the passers of the most coveted SGLG,” said Mercado, who received the 2019 SGLG award at the Manila Hotel last Tuesday.

“Through the competent and collaborative efforts of the city officials, department heads, attached partner agencies and city employees, Maasin City established positive outcomes throughout the seven core areas as it once again proved its quality and organized service for its constituents,” he added. (https://bit.ly/2JWrXq9”

Mercado said winning the SGLG award for three consecutive years “is a fulfillment of what I longed for and a hard-earned recognition.”