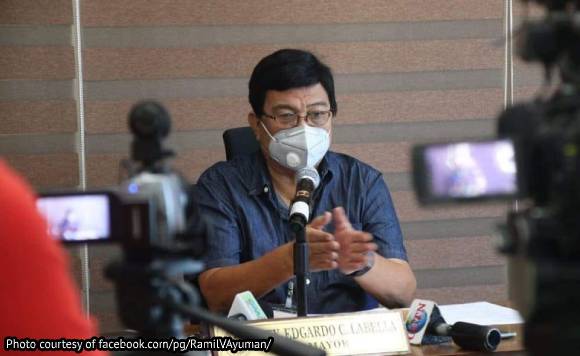 0 4
Share
Want more POLITIKO News? Get the latest newsfeed here. We publish dozens and dozens of politics-only news stories every hour. Click here to get to know more about your politiko - from trivial to crucial. it's our commitment to tell their stories. We follow your favorite POLITIKO like they are rockstars. If you are the politiko, always remember, your side is always our story. Read more. Find out more. Get the latest news here before it spreads on social media. Follow and bookmark this link. https://goo.gl/SvY8Kr

CEBU CITY – The city government here on Tuesday said it will abide by the decision of President Rodrigo Duterte and the Inter-Agency Task Force for the Management of Emerging Infectious Diseases (IATF-EID) to again place the city under enhanced community quarantine (ECQ) due to the rising number of coronavirus disease 2019 (Covid-19) cases.

Mayor Edgardo Labella, however, said that he will appeal the decision, citing the downturn of the city’s economy since the start of the community quarantine in March.

“Considering that this is the recommendation of the IATF and there is an imprimatur from (President Rodrigo Duterte), we have to abide by it, we have to comply with the order,” Labella said in a press briefing at the Cebu City Hall.

However, he noted the struggle of Cebuano families to provide food on their table and sustain their family’s daily needs while the “economy is devastated”.

“I felt one with the business community in calling for its recovery,” he added.

Labella said the city has the lowest Covid-19 mortality rate compared to the national case fatality rate. He added that the city also recorded a high recovery rate.

On Monday, the mayor said 1,858 Covid-19 patients have already recovered, leaving only 1,539 active cases here and with only 37 deaths out of the total 3,434 total confirmed cases.

“Very frankly, up to this day I still believe that a GCQ is justified. The data I see do not warrant restrictions set forth by an ECQ, so to speak and with all due respect,” Labella said, adding that the city is recognized as among the three local government units that have completed the prevalence survey coronavirus contagion through serological tests.

He admitted, however, that many city residents have shown “mild to severe symptoms” of Covid-19 which resulted in the increased demand for hospital care.

“Actually, it pains me to see Cebuanos suffer. And while we work on our appeal, I will take this time to ensure the fast-tracking of hospital capacity expansions to accommodate more patients,” he said.

In a separate statement, Dr. Jaime Bernadas, Department of Health-7 regional director, said his office has already worked with the private hospitals to expand their bed capacity intended for Covid-19 patients.

Labella said private hospitals in Cebu are accepting patients not only from the city but also from the neighboring cities and towns, as well as from other provinces in the central, eastern and western Visayas regions.

The mayor said he is also advocating the approval of more testing laboratories in order to hasten discharge of Covid-19 patients.

He assured private hospitals that the city government will assist them regarding manpower.

“In the meantime, I urge the Cebuanos to cooperate with the guidelines that I will be issuing in response and in compliance with the IATF. Stay at home, wear face mask, maintain physical distancing, observe proper hygiene,” he said.

Labella warned ECQ violators that the enforcement of protocols will be more stringent, as the Philippine National Police, Armed Forces of the Philippines, and barangays officials “are told not to hesitate to impose sanctions”.

He also said he will sanction village officials who will fail to enforce the protocols, adding that “I have the mandate under the general welfare clause of the Local Government Code”. (PNA)