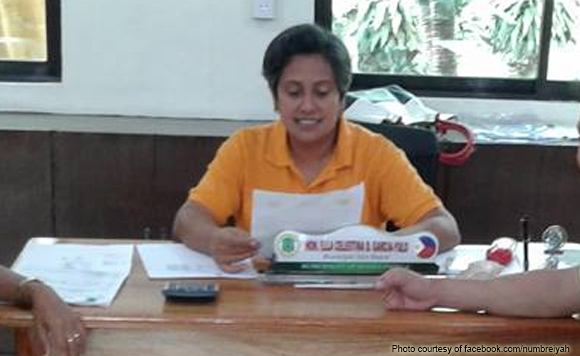 0 587
Share
Want more POLITIKO News? Get the latest newsfeed here. We publish dozens and dozens of politics-only news stories every hour. Click here to get to know more about your politiko - from trivial to crucial. it's our commitment to tell their stories. We follow your favorite POLITIKO like they are rockstars. If you are the politiko, always remember, your side is always our story. Read more. Find out more. Get the latest news here before it spreads on social media. Follow and bookmark this link. https://goo.gl/SvY8Kr

A former member of the New People’s Army (NPA) has accused Moises Padilla Mayor Ella Garcia-Yulo of Negros Occidental of having links with communist rebels.

In an affidavit submitted to the Criminal Investigation and Detection Group-Negros Occidental in Camp Alfredo Montelibano Sr., Noli Garinggo, former chairman of the Kilusang Magbubukid ng Pilipinas (KMP), claimed he served KMP and NPA since 1982.

He was disarmed and sentenced to death by the rebel group in May this year, said Garinggo.

According to him, his group called a meeting at the home of a certain “Neneng Timbad” in the Barangay Guinpanaan last February 2016 where he saw Garcia-Yulo and former vice mayor Ian Villaflor, and other KMP district members from central and southern Negros.

The meeting centered on NPA “datos” or those identified for liquidation, said Garinggo.

The ex-rebel also claimed he saw the names of Nonong Grande, Joerito Amable, Rusty Caminade, and town councilor Jolomar Hilario – all gunned down – in the NPA hit list.

Garcia-Yulo and Villaflor have denied allegations linking them to communist rebels.

Last year, Garinggo was forced into hiding after he separated from his wife, who made false accusations against him before the NPA, until he later learned that he, along with fellow rebel Jerry Turga, were sentenced to death after opposing kill orders issued by the NPA.