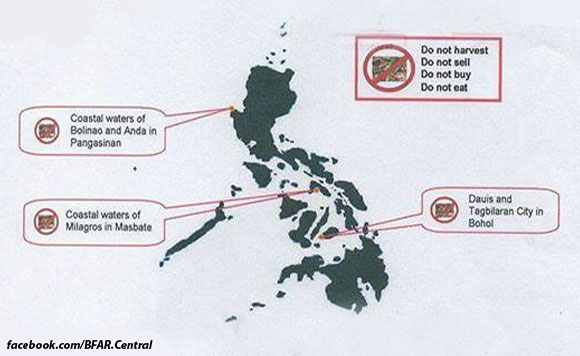 0 308
Share
Want more POLITIKO News? Get the latest newsfeed here. We publish dozens and dozens of politics-only news stories every hour. Click here to get to know more about your politiko - from trivial to crucial. it's our commitment to tell their stories. We follow your favorite POLITIKO like they are rockstars. If you are the politiko, always remember, your side is always our story. Read more. Find out more. Get the latest news here before it spreads on social media. Follow and bookmark this link. https://goo.gl/SvY8Kr

Red tide toxins are threatening shellfish in parts of Bicol, Southern Luzon and Visayas, the Bureau of Fisheries and Aquatic Resources said.

In its Aug. 3 update, the BFAR said Siit Bay in Siaton, Negros Oriental is the latest to test positive for the red tide toxin.

Also, the BFAR warned against collecting shellfish in:

The BFAR said shellfish and “alamang” gathered from these areas “are not safe for human consumption.”

It added there should be no harvesting, selling, buying or eating of shellfish there.

Fish, squids, shrimps and crabs are safe for human consumption but have to be fresh and washed thoroughly, the BFAR added.

Their internal organs such as gills and intestines should also be removed before cooking, it said.