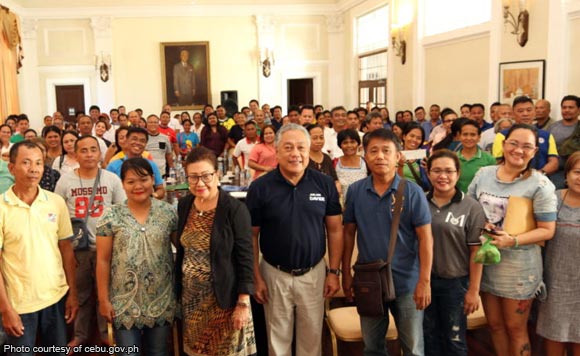 0 3,570
Share
Want more POLITIKO News? Get the latest newsfeed here. We publish dozens and dozens of politics-only news stories every hour. Click here to get to know more about your politiko - from trivial to crucial. it's our commitment to tell their stories. We follow your favorite POLITIKO like they are rockstars. If you are the politiko, always remember, your side is always our story. Read more. Find out more. Get the latest news here before it spreads on social media. Follow and bookmark this link. https://goo.gl/SvY8Kr

At least 65 barangays in Cebu will finally have funds for their projects after they received financial assistance from the Cebu provincial government.

Davide and Vice Governor Agnes Magpale distributed the checks to the barangay captains at the Capitol Dignitaries Hall last March 4.

The governor thanked the barangay officials for their patience in waiting for the release of their cash assistance (https://www.cebu.gov.ph/news/capitol-distributes-cash-assistance-to-65-barangays/).

Magpale said another batch of barangays and local government units will receive their financial assistance from the Capitol in the next two weeks.

The provincial government said the funds received by the 65 barangays varied because the financial assistance given were based on the need of their villages.

Other projects funded by the assistance include barangays’ sport activities, seminars and workshops, repair of service vehicles, renovation of barangay hall, socio-cultural activities, implementation of digital archiving, and construction of perimeter fence and fisherfolks’ resthouse/meeting center.