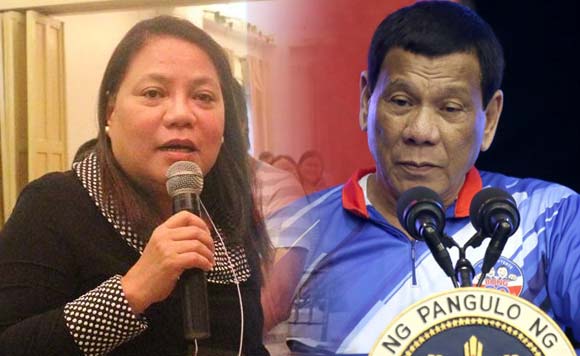 0 1,764
Share
Want more POLITIKO News? Get the latest newsfeed here. We publish dozens and dozens of politics-only news stories every hour. Click here to get to know more about your politiko - from trivial to crucial. it's our commitment to tell their stories. We follow your favorite POLITIKO like they are rockstars. If you are the politiko, always remember, your side is always our story. Read more. Find out more. Get the latest news here before it spreads on social media. Follow and bookmark this link. https://goo.gl/SvY8Kr

The wife of ex-Iloilo City mayor Jed Patrick Mabilog has dared President Rodrigo Duterte to furnish the media details of the validated list of politicians which it claims are linked to illegal drugs.

Maria Victoria made this remark on Friday, the morning after Duterte announced the new list of 46 government officials who are allegedly involved in illegal drug trade.

“If your latest narco-list is truly validated, why don’t your furnish the media the validated list and the sources of your data, properly validated by the reporting agencies?” she wrote in social networking site Facebook.

Despite allegations of the President that her husband is protecting drug lords, Mrs. Mabilog lamented that no drug-related case has been filed against him.

“You came up empty against Jed. Nada. Zero. Zilch. You resorted to lies and fabrication which your own agencies have consistently rebutted. You think by continually shaming him and lying about him will do him damage. But Jed’s shield and armour are the truths you refuse to acknowledge. The harder you hit the truth, the more sparkling and stronger it becomes. Leave us alone already,” Maria Victoria said.

She also pointed out that Mabilog tirelessly worked to stop the illegal drug problem in Iloilo City, while Duterte hardly worked in Davao City.

“2010-2016. Pareho sila Mayor. Si Jed, sa Iloilo City, Si Digong, sa Davao. While Jed was working hard for the eradication of the drug menace and getting results, Digong was hardly working in Davao. While Iloilo was cited as the third least drug infected city, Davao had one of the worst records in drug trade and use in the country,” according to her.