LTFRB to run after Angkas in Cebu 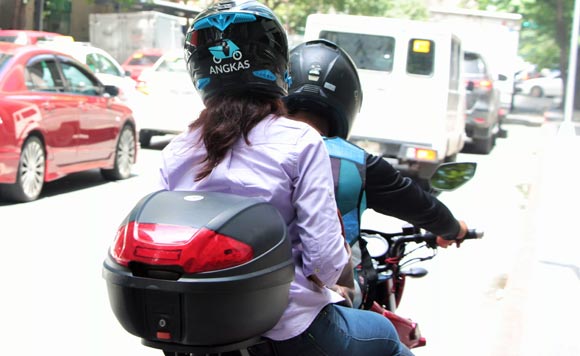 This, as Mayor Tomas Osmeña said Thursday the SC ruling against Angkas is detrimental to the people here where there is no alternative mode of transportation that can serve them, except for motorcycles locally called as “habal-habal.”

LTFRB-7 chief Eduardo Montealto Jr. said they will include in their operation the apprehension of “habal-habals” operating in various mountain barangays in Cebu.

“From the beginning, the practice of taking passengers using a motorcycle for a fee has been illegal,” he said.

Montealto said “habal-habals” in the mountain barangays, and even the urban-version Angkas, have no franchise from the government.

Under the law, any vehicle that takes passengers for a fee without a permit is illegal and referred to as “colorum”.

The lives of passengers taking Angkas are at risk, the LTFRB-7 chief said.

Montealto said it is the mandate of the LTFRB to arrest colorum vehicles, including “habal-habal” and Angkas.

Land Transportation Office-7 chief Victor Caindec told the Philippine News Agency (PNA) that they are waiting for a directive from their central office in Manila, following the high tribunal’s decision against Angkas.

He, however, said his office is willing to assist LTFRB-7 in apprehending “habal-habals” and Angkas operating in the region, particulary in Cebu City where their illegal operation is tolerated by the local government unit.

On his social media post, however, Osmeña said “habal-habals, especially in the mountain barangays, are simply a fact of life because no alternative means of transportation exists.”

He said even in the urban areas, “there is a shortage of public rides.”

“Habal-habals are used because for many, they are simply the most practical way to get around. What Angkas did is take the shortcomings of habal habals and improve upon them,” the mayor’s post read.

According to the mayor, Angkas made the passengers “safer by making
drivers identifiable and requiring drivers to provide clean helmets to
passengers and install speed limiters in their bikes.”

Osmeña also reacted to the issue on overpricing of fare rate being collected by Angkas riders. “They reduced overpricing. They even helped with the traffic by allowing direct pickups instead of having all the bikes wait by the street,” he added.

“Without ‘habal-habals’, the majority living in Cebu City’s two dozen mountain barangays will have no means of transportation,” he said. “We are also exploring the legality of an LGU producing it’s own
Angkas-like program to make up for the loss of Angkas. We will do everything we can to benefit the public good.”

On Wednesday, the high court issued a temporary restraining order against a decision of the Regional Trial Court Branch 213 in Mandaluyong that barred authorities from apprehending drivers operating under Angkas. (PNA)