LP split in Cebu’s District 6: Will Rep. Luigi run for re-election or mayor? 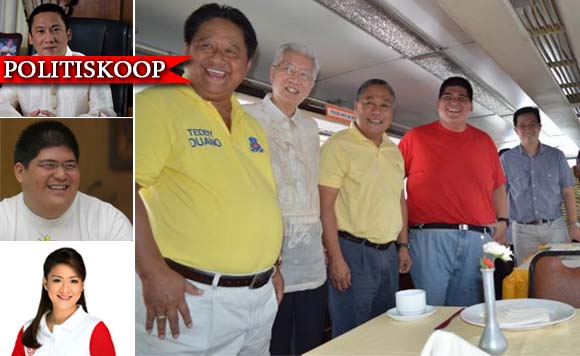 MANDAUE CITY, Cebu. While the Liberal Party (LP) in Cebu province aims to retain its hold on the sixth district, the long standing local alliance among the district representative, provincial board member and Mandaue City mayor may eventually break up even before 2016 polls.

Mandaue City Mayor Jonas Cortes, Rep. Gabriel Luis Quisumbing and former mayor and now Provincial Board (PB) Member Thadeo Ouano are at the center of a broad political alliance of the province’s sixth district that includes local city officials and politicians from the large towns of Consolacion and Cordova.

These three bigwig politicians are all LP members.

Mayor Cortes has said that he is “open to the idea of swapping positions” with Rep. Quisumbing in next year’s elections.

Cortes is on his third and last term. Quisumbing is on his second term as congressman.

Quisumbing is reportedly firming up his supposed bid for mayor as he is seen more and more in Mandaue and less and less in the towns of Consolacion and Cordova.

But Ouano is pushing for the LP to anoint his daughter, number one Mandaue City Councilor Emmarie “Lollipop” Ouano-Dizon to run for the mayoralty post and for Quisumbing to run unopposed for his third term. He did not say what will happen to Cortes.

Quisumbing for his part, has not said a word if he would run for a third term or run for mayor as he has kept busy with his duties as congressman.

The LP decision, especially that of Gov. Davide, who is the province’s party chairman, will affect the fortunes of all the party’s national and local candidates in the sixth district.

But the political body language of all sides show that a massive split in LP-Cebu is in the offing.