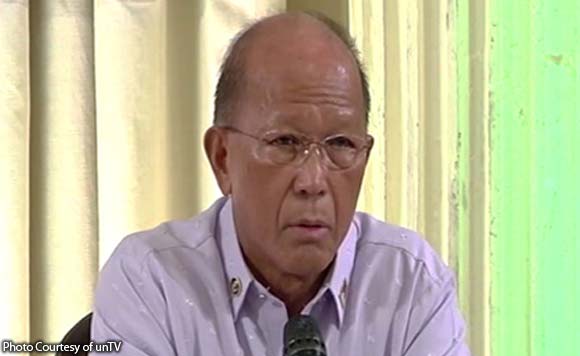 0 838
Share
Want more POLITIKO News? Get the latest newsfeed here. We publish dozens and dozens of politics-only news stories every hour. Click here to get to know more about your politiko - from trivial to crucial. it's our commitment to tell their stories. We follow your favorite POLITIKO like they are rockstars. If you are the politiko, always remember, your side is always our story. Read more. Find out more. Get the latest news here before it spreads on social media. Follow and bookmark this link. https://goo.gl/SvY8Kr

The national government has committed to finance the P12 billion needed to construct roads traversing rebel-infested communities in the tri-boundaries of Samar Island.

Defense Secretary Delfin Lorenzana said Friday the government has enough funds to help the three provinces of Samar carry out the road projects that he believed would be the key to end decades of communist rebellion on the island.

“The Department of National Defense and the Department of Public Works and Highways (DPWH) will have a convergence to ensure that road projects in the conflict-stricken areas of Samar will be completed within the term of President Rodrigo Duterte,” Lorenzana told reporters after the second-quarter Eastern Visayas Regional Peace and Order Council (RPOC), which was held in the upland village of Villaconzoilo here.

The commitment include the deployment of engineering battalions to project sites and securing heavy equipment of DPWH contractors. Burning of construction equipment is a strategy of rebels to delay or stop government projects, said Lorenzana.

Under the proposal, the budget will not only focus on funding infrastructure projects, but also livelihood support to make the program more integrated.

“If necessary infrastructures are in place, the NPAs (New People’s Army) will not be able to recruit new members since it is easier for the government to bring services after (completion of the) road projects,” Lorenzana said.

The Samar provinces have been the stronghold of armed rebels due to their densely-forested mountainous areas, high poverty incidence, and issue of widespread landlessness, according to a 2013 study of William Norman Holden of the University of Calgary in Canada.

The NPA launched its first tactical operation in the country in Calbiga, Samar in 1974, when its members ambushed an Army scout patrol and seized a number of weapons.

In 1976, the NPA gained popular support among the inhabitants of Samar following its actions against cattle rustling gangs.

In the Eastern Visayas region, three cities and 24 towns have confirmed NPA activities. There are 404 active NPA members in Eastern Visayas equipped with 576 firearms in four provinces, the military said. (PNA)