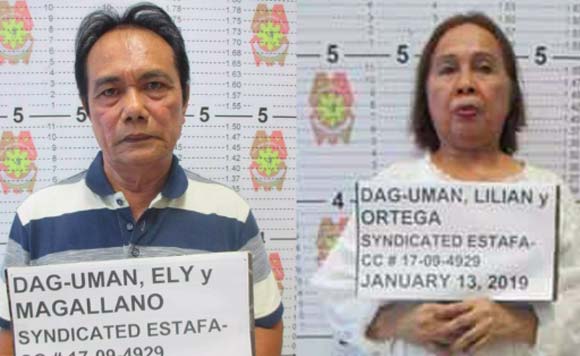 0 1,246
Share
Want more POLITIKO News? Get the latest newsfeed here. We publish dozens and dozens of politics-only news stories every hour. Click here to get to know more about your politiko - from trivial to crucial. it's our commitment to tell their stories. We follow your favorite POLITIKO like they are rockstars. If you are the politiko, always remember, your side is always our story. Read more. Find out more. Get the latest news here before it spreads on social media. Follow and bookmark this link. https://goo.gl/SvY8Kr

A husband and wife tagged as “most wanted” persons in Maasin City, Southern Leyte, were arrested by authorities during a raid on Sunday in Barangay New Visayas, Panabo City, Davao del Norte.

Police identified the suspects as Ely Dag-uman and his wife, Lilian. Both are wanted for syndicated estafa.

Morales said the couple has pending warrants of arrest issued by a regional court in Maasin City.

“This accomplishment demonstrates the serious implementation of our campaign against most wanted persons,” Morales said.