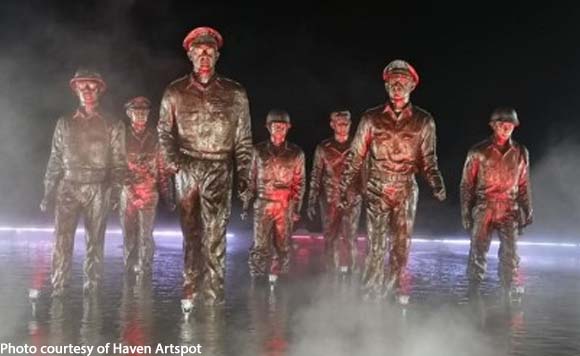 Just a week before the 75th Leyte Gulf Landings commemoration, the Leyte provincial government and the Department of Tourism (DOT) inaugurated on Sunday night the newly-improvedk in this town.

This is the first major facelift of the historic park after 25 years. The last improvement was done in 1994 during the 50th Leyte Gulf Landings anniversary.

The P69-million improvement includes landscaping, construction of a view deck and visitor center across the park, improvement of the lights and sound system, installation of a dancing fountain, treehouse, and amphitheater.

The DOT, through the Tourism Infrastructure and Enterprise Zone Authority (TIEZA), funded the rehabilitation of the national park under the Comprehensive Yolanda Recovery and Rehabilitation Program.

Also rehabilitated was the Eternal Flame built in time for the 50th Leyte Gulf Landings commemoration. The structure features solidarity messages of leaders of countries involved in the Battle of Leyte Gulf during World War II led by the United States.

A small bridge was also constructed to connect the Leyte Oriental Hotel and McArthur Park to give easy access to hotel guests who would want to visit the memorial park.

DOT Regional Director Karina Rosa Tiopes said the central government made improvements at the park to honor Filipino soldiers, Allied Forces, and even Japanese soldiers who lost their lives during the war.

“This is a place of dignity and reverence. Let us all please, keep this park clean and give due respect of why this park was made,” Tiopes said.

Hundreds of residents here and from Tacloban City attended the ceremony, thrilled to see the improvement that the government did to one of the most famous landmarks in the region.

“Never forget the valor of our heroes, this park is to give honor to our veterans who sacrificed their lives and we repay that by loving our country,” Petilla said.

The MacArthur Landing Memorial National Park is situated on a 6.78-hectare area in Candahug village in this town that features seven double-life-size bronze statues on a man-made pool depicting the return of Gen. Douglas MacArthur in Leyte province.

The bronze statue, inaugurated during the 37th anniversary of the Leyte Landing Commemoration in 1981, was created by famous sculptor Anastacio Tanchauco Caedo. His other works include the Benigno Aquino Monument and the Bonifacio Monument in Pugad Lawin, Balintawak.

MacArthur Park was declared a national park on July 12, 1977, through Letter of Instructions No. 572 signed by then President Ferdinand Marcos.

The site is where MacArthur arrived on October 20, 1944 during the largest naval battle of World War II that led to Japan’s eventual surrender after almost three years of occupying the Philippines. (PNA)