Leyte placed under state of calamity due to ‘Ursula’ 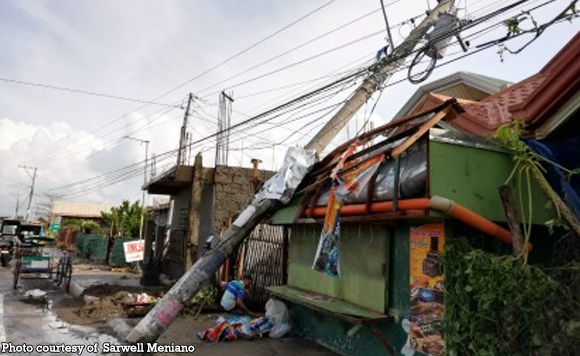 0 1,470
Share
Want more POLITIKO News? Get the latest newsfeed here. We publish dozens and dozens of politics-only news stories every hour. Click here to get to know more about your politiko - from trivial to crucial. it's our commitment to tell their stories. We follow your favorite POLITIKO like they are rockstars. If you are the politiko, always remember, your side is always our story. Read more. Find out more. Get the latest news here before it spreads on social media. Follow and bookmark this link. https://goo.gl/SvY8Kr

TACLOBAN CITY — Leyte‘s provincial government has placed the entire province under a state of calamity after Typhoon Ursula left a trail of destruction when it crossed the region on Christmas Eve.

The declaration was made late Thursday afternoon through a “Session en Consulta” where members of the Provincial Board were required to participate through mobile phone calls, Viber, and Messenger to get their decision if they agree to the declaration.

Members of the Provincial Board agreed on the process shortly after Super Typhoon Yolanda hit Leyte, and since then was used by provincial legislators after a disaster.

Vice Governor Carlo Loreto said the declaration was approved at 4:30 p.m. after getting the support of 11 of the 13 Board members.

With the approval of the declaration of a state of calamity, the province can now use the 5 percent of its calamity fund from its annual budget.
Based on the initial information from the Provincial Disaster Risk Reduction and Management Office (PDRRMO), at least 15 percent of farms and infrastructure were damaged by “Ursula”.

Initial worth of damage on crops is at PHP10 million, fisheries at PHP12.164 million, livestock and poultry at PHP2.63 million, and infrastructure at PHP20 million or a total of PHP44.80 million.

At least 13 towns in the province were severely affected by “Ursula”. Among the towns that sent initial damage assessment are Palo, Barugo, Dulag, Isabel, and Kananga.

A total of 1, 941 families were evacuated to safety during the typhoon’s onslaught.
Fatalities were reported in Baybay City with one death, Abuyog also with one, and two in Kananga.