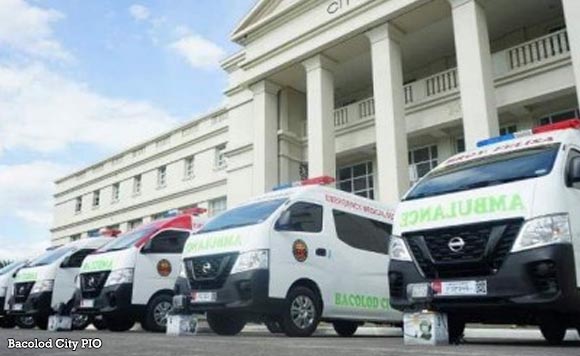 The vehicles are fully equipped, including first-aid kits, stretchers, and basic requirements for rescue operations, a press release from the city public information office said. (https://bit.ly/3iCTTPV)

The ambulances were procured using the 2019 budget, but their delivery was delayed due to the coronavirus disease pandemic, according to Leonardia.

“I hope that people will understand that. The bottom line is that these ambulances are ready to service our people in times of emergency,” the mayor said.

Leonardia, who is also the chairman of the CDRRM Council, said Bacolod now has 14 new ambulances. CDRRMO has four ambulances, while barangays Bata, Granada, Handumanan, Sum-ag, Singcang-Airport, and Tangub have one each.

“This is a big help for barangays in times of emergency. I believe having ambulances each in 10 big barangays, plus four in CDRRMO, is already very substantial,” he added.

“Nevertheless, it doesn’t mean we will stop giving ambulances to barangays. We will continue to explore the possibilities that we can give ambulances to other barangays. In the meantime, those smaller and nearer barangays will be serviced by the CDRRMO.”