Leonardia to speak at UCLG World Congress in South Africa 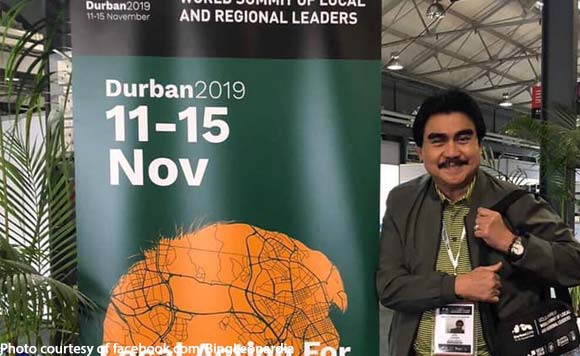 Bacolod City Mayor Evelio Leonardia, also the national president of the League of Cities of the Philippines (LCP), is representing the Philippines at the World Summit of Local and Regional Leaders.

The World Summit, the largest gathering of mayors, presidents of associations, councilors, and local and regional practitioners from around the world, is convened by the United Cities and Local Governments (UCLG), in Durban, South Africa, starting yesterday until Friday.

Leonardia will speak at the World Summit of the CEO Forum on Local Government Associations to share his insights on issues besetting Philippine cities today. These include disaster risk management, sustainable development, and managing the impacts of climate change. (https://bit.ly/32H6MPB)

He will also meet potential partners to support the efforts of Philippine cities on sustainable urban development.

Leonardia is also expected to touch base with various institutional partners such as the World Bank, Cities Alliance, and UN Environment, which previously supported capacity-building programs for Philippine cities in the hope of renewing ties with these institutions.

Leonardia said his participation in the World Assembly is aimed at securing a seat in the World Council for the LCP.

A place in the World Council will increase international visibility for the association, which can support global knowledge-sharing exchanges that Philippine cities support, he added.

Continue Reading
Bacolod CityLeague of Cities of the PhilippinesMayor Evelio Leonardia
0
Share
Politiko would love to hear your views on this...
Trending News
More Stories