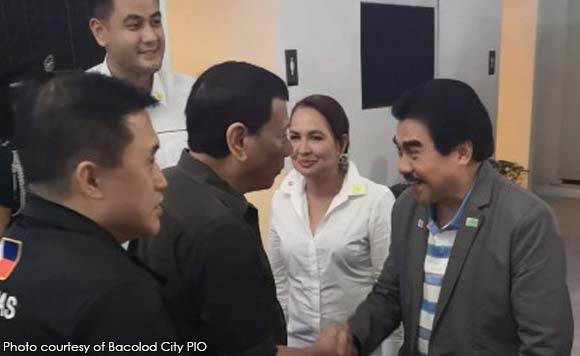 0 490
Share
Want more POLITIKO News? Get the latest newsfeed here. We publish dozens and dozens of politics-only news stories every hour. Click here to get to know more about your politiko - from trivial to crucial. it's our commitment to tell their stories. We follow your favorite POLITIKO like they are rockstars. If you are the politiko, always remember, your side is always our story. Read more. Find out more. Get the latest news here before it spreads on social media. Follow and bookmark this link. https://goo.gl/SvY8Kr

BACOLOD CITY — Mayor Evelio Leonardia here said Wednesday afternoon that he would lead the League of Cities of the Philippines (LCP) through a participative approach.

“I would like to have a very participative league. We would like them to give us their ideas, plans, sentiments, concerns, and even their problems. I believe it should be a case where the city mayors are telling the league what to do than the league telling them what to do,” he said in a press briefing.

Leonardia was recently elected national president of the LCP, the organization of all 145 cities across the country, for the 2019-2022 period.

He said the league will conduct an assessment survey, which the mayors can respond to, in time for the league’s assembly this coming September in Davao City.

Leonardia said that for the first time, the LCP is creating a special position, the focal mayor for the anti-illegal drugs campaign, which will be assumed by Baguio Mayor Benjamin Magalong.

He also said that Bacoor Mayor Lani Mercado-Revilla and Pasay Mayor Emi Calixto-Rubiano will be the focal mayors for transportation and international relations, respectively.

“The LCP should be aligned with the administration’s goals and objectives as an association of chief executives. While we will have our individual concerns with our constituents, we should also think in terms of the national picture,” Leonardia said.