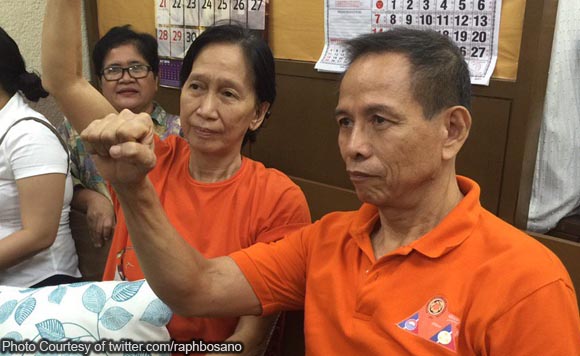 0 297
Share
Want more POLITIKO News? Get the latest newsfeed here. We publish dozens and dozens of politics-only news stories every hour. Click here to get to know more about your politiko - from trivial to crucial. it's our commitment to tell their stories. We follow your favorite POLITIKO like they are rockstars. If you are the politiko, always remember, your side is always our story. Read more. Find out more. Get the latest news here before it spreads on social media. Follow and bookmark this link. https://goo.gl/SvY8Kr

Alleged top leaders of the Communist Party of the Philippines (CPP) Benito and Wilma Tiamzon were given temporary liberty by a local court in Cebu.

Regional Trial Court (RTC) Branch 29 in Toledo City under Judge Ruben Altubar has allowed the couple to post bail in time for the resumption of peace talks between the Philippine government and the National Democratic Front of the Philippines (NDFP) in Oslo, Norway.

The two were among the 22 NDFP consultants who will participate in the formal peace negotiations in Oslo from August 20 to 27.

The court ordered the couple to post a bail of P100,000 each for charges of illegal possession of firearms.

The court stressed that the provisional liberty of the Tiamzons shall only be for the purpose of their participation in the formal peace talks and the bail bond will be deemed terminated once their role in the talks is over.

The couple was also required to provide the court contact information both in the Philippines and in Norway and to report to the Philippine Embassy in Norway.

The Tiamzons are also facing murder and frustrated murder charges at the RTC in Laoang town, Northern Samar, and kidnapping and serious illegal detention at the RTC in Quezon City, Branch 216.

The two courts are also likely to grant bail to the couple.

Aside from the Tiamzons, Ma. Concepcion “Concha” Araneta-Bocala, who is also an alleged top communist rebel on Panay Island, has also been granted temporary freedom.

She was also freed to join the peace talks in Norway.