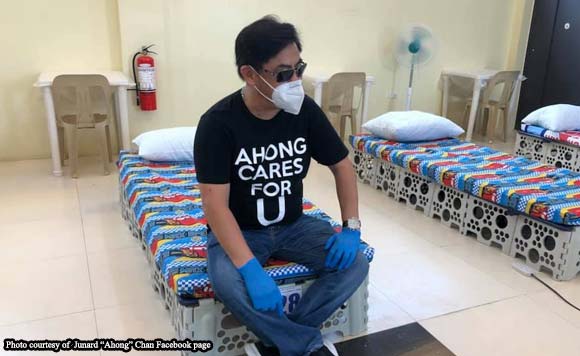 In reporting back for work on Thursday, Chan was greeted by members of the City Council and other city officials and employees in front of the Lapu-Lapu City Hall.

He believed he contracted Covid-19 during the times he removed his face mask while in public places and ate in the company of other people.

He thanked the medical front-liners who attended to him during his isolation.

Chan announced the negative result of his second swab test on Wednesday on his official social media page.

Instead of attending the flag ceremony on Independence Day last June 12, Chan went to social media to relay the message that he was infected with the dreaded virus.

He said he was touched by the messages of support from his constituents and well-wishers, which gave him the strength to continue working through constant virtual meetings with the city’s Crisis Management Team and to strive to recover as early as possible.

Chan considered his recovery from Covid-19 as “second life”, saying he viewed it as a miracle and debt from God, the Our Lady of the Rule, the patroness of Mactan Island, and Señor Sto. Niño.

Chan was the first local chief executive in Cebu to contract the coronavirus. The second was Mayor Sun Shimura of Daanbantayan who announced last Sunday that he tested positive for Covid-19.

The municipal hall of Daanbantayan suspended operations last Monday to disinfect the building while the Office of the Mayor has also been closed and will be opened after a week.