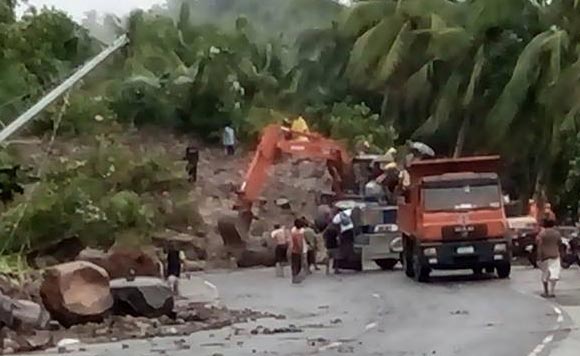 Bueno said field workers have been working double time to clear the roads from rocks and muds.

“We even asked help from our contractors to mobilize needed equipment to fast-track clearing operations in Northern Samar. This is our top priority as of this time,” Bueno told the Philippine News Agency.

“As of 6 a.m. today (Nov. 21), half of the road has been opened to traffic. The target is to open both lanes of the road within the day,” Bueno added.

The Philippine Atmospheric, Geophysical, and Astronomical Services Administration said Tropical Depression Samuel made its landfall on Wednesday in Borongan City around 2 a.m. and Daram, Samar at 4 a.m. Its third landfall was recorded 9 a.m. in Barotac Nuevo, Iloilo.

The weather disturbance has maximum sustained winds of 45 kilometers per hour (kph) near the center and gustiness of up to 65 kph. It is moving west southwest at 40 kph. (PNA)