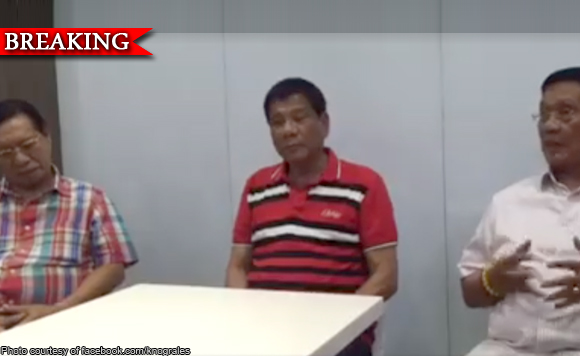 Bitter political rivals have locked arms to rally behind Davao City Mayor Rodrigo Duterte whom they saw their first real chance have a Mindanao politiko in Malacanang.

Deputy Speaker Pangalian Balindong and former Lanao del Sur Rep. Benasing Macarambon Jr. have agreed to endorse the presidential run of Duterte.
The meeting at Radisson Hotel in Davao was arranged by Davao City Rep. Karlo Nograles who posted a video of event on Facebook:

“They see us as a colony of imperial Manila and I know you are the only one who can top this,” said Balindong.

Balindong said Duterte’s platform of federalism was the best solution to the Muslim’s problem without seceding from the country.

Balindong said his decision to join hands with Macarambon was significant because they have been at each other’s throats in contesting the second district of Lanao del Sur for the last two decades. “He (Macarambon) defeated me twice, I defeated him thrice, kulang na lang magbarilan kami,” said Balindong, the administration’s most influential ally in Muslim Mindanao.