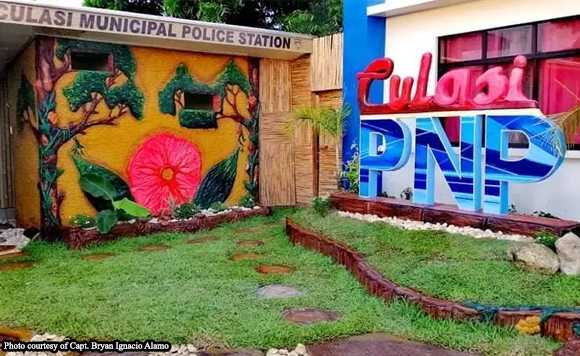 After defying quarantine protocols, the violators are now helping the local police in the renovation of their station, Capt. Bryan Ignacio Alamo, officer-in-charge of CMPS told the Philippine News Agency (PNA) on Friday.

“We started that we, our personnel, worked for the renovation. Later on, we apprehended ECQ violators who are also construction workers. After their overnight detention, we told them to work for us because we will provide them a salary,” he said.

Alamo said the four (whose names were not given) were frustrated after losing their jobs due to the pandemic. They were compensated with PHP500 daily for a month’s work helping the local police in the construction, which started in the second week of April.

With the effort of the CMPS, they were able to put up a “Bayanihan Hut” within the station’s compound.

“We entertain our clients at the Bayanihan Hut to avoid contamination at the police station,” he said.

Alamo said the move is in compliance with the order of Police Regional Office 6 director, Brig. Gen. Rene Pamuspusan, to implement measures against the spread of coronavirus disease 2019 (Covid-19) and also refurbish stations and offices.

The police were supported by Culasi stakeholders and the local government unit in the project, Alamo said.

They have also utilized recycled construction materials in establishing the hut and beautifying the landscape.

Aside from turning violators into part of the workforce, Alamo said the renovation has also boosted the morale of the local police.

“The healthy workplace motivates our personnel to become more productive. Now that we are facing a pandemic, it is important that we create and look into good things,” he said.

The renovation of the station also jives with Culasi’s brand of being Antique’s tourism capital.

With the initiative of the police, Alamo said they can help lift Culasi’s tourism sector after the pandemic. (PNA)