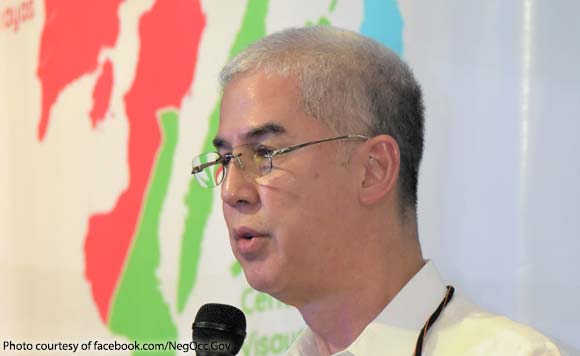 0 9
Share
Want more POLITIKO News? Get the latest newsfeed here. We publish dozens and dozens of politics-only news stories every hour. Click here to get to know more about your politiko - from trivial to crucial. it's our commitment to tell their stories. We follow your favorite POLITIKO like they are rockstars. If you are the politiko, always remember, your side is always our story. Read more. Find out more. Get the latest news here before it spreads on social media. Follow and bookmark this link. https://goo.gl/SvY8Kr

Negros Occidental Governor Eugenio Jose Lacson denied the motion for reconsideration (MR) filed by four former employees of the Office of the Provincial Agriculturist (OPA) who were fired for binge drinking while on official travel in Victorias City last year.

Lacson stated in a resolution that an MR may be granted only if new evidence is discovered; the assailed decision is not supported by the evidence on record; and/or errors of law or irregularities have been committed prejudicial to the movant’s interest.

He said that no new evidence has been discovered or submitted by the respondents that would materially alter or affect his Jan. 3 decision dismissing them from the service. (https://bit.ly/3H9lXHk)

His earlier decision was also supported by evidence on record, as the respondents’ position paper was considered.

While respondents heavily relied on the alleged invitation of the Victorias City agriculturist, Lacson said that there was nothing to back this up other than the respondents’ bare and self-serving claims.

Lacson went on to say that their position paper contains no proof in the form of affidavits or other documentary evidence.

He added that unless the claim or allegation is supported by a sworn statement from the Victorias City agriculturist himself, it cannot be given weight in favor of the respondents.

Furthermore, Lacson pointed out that since the July 15, 2022 meeting ended at 4:45 p.m., no one among the respondents bothered and cared to inform their driver that the meeting had ended early and that they were at a restaurant outside Victorias City Hall.

The driver only found out where the four were around 8 p.m. when he contacted one of the respondents on his own initiative and obtained the information.