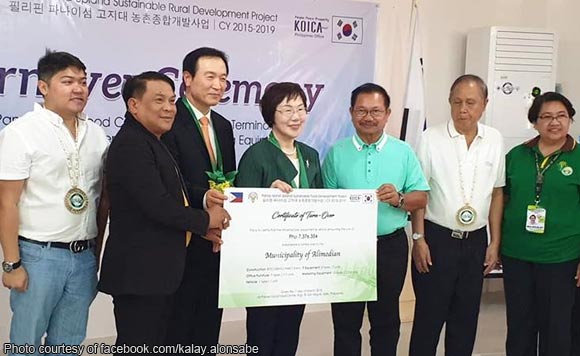 0 411
Share
Want more POLITIKO News? Get the latest newsfeed here. We publish dozens and dozens of politics-only news stories every hour. Click here to get to know more about your politiko - from trivial to crucial. it's our commitment to tell their stories. We follow your favorite POLITIKO like they are rockstars. If you are the politiko, always remember, your side is always our story. Read more. Find out more. Get the latest news here before it spreads on social media. Follow and bookmark this link. https://goo.gl/SvY8Kr

KOICA turned over last March 1 some P65.5 million worth of facility and equipment to local government units and beneficiary farmers’ associations in Panay.

Lee said the project, now on its third and final phase, “seeks to establish the sustainable development system run by farmers in the rural area, especially the upland, which remains at the outskirts of benefits in terms of development.”

Agriculture Secretary Emmanuel Piñol, who represented the government at the ceremony, said the project will elevate the status of Panay farmers from just being raw material producers to becoming processors, marketers, and even “agripreneurs.”

“Our farmers in the country have been nailed to the status of just being raw material producers. This is why today, the Iloilo province will mark a shift from that status. Today the farmers in Panay will be moving one level higher, from just a farmer that produces bean, cabbage, or tomatoes to the farmer who plants, harvest, and markets his products,” he said.

The project, which started in 2015, is a collaboration among the KOICA and DA, Hankyong National University as KOICA-Project Management Consultancy (PMC), and the DA Regional Field Office VI (DA RFO VI).

Via the public-private partnership, the project will establish a sustainable rural development environment throughout the project cycle.

The first phase focused on community development and was implemented in 15 pilot upland barangays from four towns in Antique, Capiz and Iloilo.

Meanwhile, the final stage focuses on the promotion of local food marketing and building an integrated mechanism between marketing and finance as a local food system in 11 municipalities of Panay Island.

For her part, San Miguel Mayor Marina Luz Gorriceta thanked the stakeholders and stressed the challenge for the beneficiaries to innovate and work hard.

“This is a huge challenge for all of us on how to sustain the production of farm products. In this premise, we must be innovative and learn more knowledge on how to grow multi-cropping and apply multi-method of growing them for abundant harvest. We have to work harder to assure that this project will be sustained,” she said.