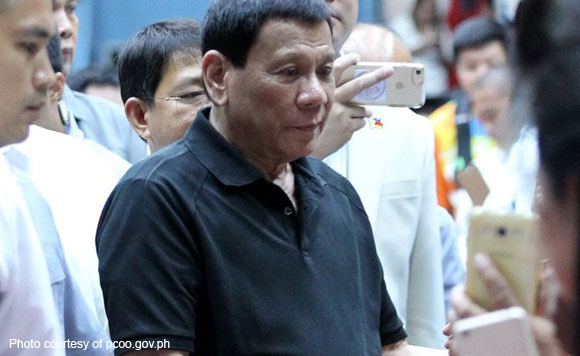 0 936
Share
Want more POLITIKO News? Get the latest newsfeed here. We publish dozens and dozens of politics-only news stories every hour. Click here to get to know more about your politiko - from trivial to crucial. it's our commitment to tell their stories. We follow your favorite POLITIKO like they are rockstars. If you are the politiko, always remember, your side is always our story. Read more. Find out more. Get the latest news here before it spreads on social media. Follow and bookmark this link. https://goo.gl/SvY8Kr

President Rodrigo Duterte appears to be softening his view on barangay officials whom he has accused as part of the drug apparatus in the country.

In a speech before the oath-taking of Central Visayas baragay captains, Duterte planned not only to arm them but also treat them at par with police and soldiers involved in killing of drug suspects – he promised to give them pardon should they be co victed of killing drug suspects during anti-drug operations.

“Performance of duty? Shot a thousand in the line of duty? Fine. I’ll support you. I will never allow a soldier or police or barangay captain to go to jail for killing someone in the performance of their duty. And I will tell you, you will never go to jail,” said Duterte.

“There is no limit to how many I can pardon. I can pardon the police and barangay captains. If you say, ‘Mayor, there’s an encounter. But the truth is I really killed the person’. Good, ” he added.

Duterte said he wanted barangay officials as partners in his war on drug even though he claimed than most of them were drug protectors or couriers. ” Only you can put an end to the drugs, not us. Sometimes the police refuse to act because the barangay captain is there. So that’s what I’m asking from you,” said Duterte.

Duterte said he was seriously considering to arm the barangay officials to level up his war on drugs and crime.

“Try to study, what ails your barangay and let us talk again. And if it’s a matter of security, then I can maybe provide you with the firearm, but that has to be discussed about. I cannot, I will not decide it on my own. It’s not good,” said Duterte.

In 2003, the Philippine National Police (PNP) allowed barangay captains to carry firearms in a bid to help curb crime with certain conditions – only the barangay captain can have a handgun no larger than a 9-mm. or caliber .38.

Section 389 of the Local Government Code states: “In the performance of his peace and order functions, the punong barangay shall be entitled to possess and carry the necessary firearm within his territorial jurisdiction, subject to appropriate rules and regulations.”