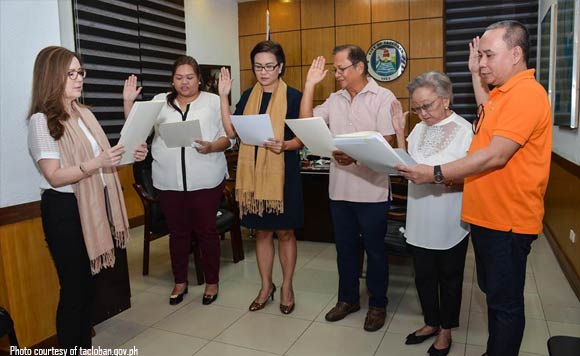 0 793
Share
Want more POLITIKO News? Get the latest newsfeed here. We publish dozens and dozens of politics-only news stories every hour. Click here to get to know more about your politiko - from trivial to crucial. it's our commitment to tell their stories. We follow your favorite POLITIKO like they are rockstars. If you are the politiko, always remember, your side is always our story. Read more. Find out more. Get the latest news here before it spreads on social media. Follow and bookmark this link. https://goo.gl/SvY8Kr

Employees of the Leyte Metropolitan Water District (LMWD) have expressed their support to the newly-appointed board of directors in their month-long power struggle against appointees of Leyte Governor Leopoldo Dominico Petilla.

LMWD acting general manager Pastor Homeres recognized in a press briefing on Sunday the new set of board of directors picked by Tacloban Mayor Cristina G. Romualdez and withdraw his support to the officials chosen by Petilla.

“Anchored on the recently decided case of the Supreme Court, Romualdez exercised her mandate and appointed a new set of board of directors for LMWD which has assumed their duties and functions and such, and was given due recognition and full support of the employees and the undersign,” said Homeres who was surrounded by the majority of LMWD’s 300 employees.

The manager issued the statement two weeks after he officially refused the appointment of five new board members.

Citing legal issues, the old officials backed by Petilla refused to vacate their posts, which triggered series of protests outside the LMWD office from supporters of new officers. The new board of directors camped at the LMWD compound.

On Friday, the old board of directors held an urgent meeting and recalled the appointment of Homeres as manager of the public water utility after some employees denied the entry of officials appointed by the governor to the LMWD premises.

“With the insistence of the old board appointed by the Leyte governor to still be legitimate officials, peace and order have continued to be disrupted,” Homeres added.

The manager called for an investigation of corruption committed by the old board of directors in the implementation of projects such as office building constructions, pipeline projects, and purchase of vehicle.

“For years, I kept mum on the dark side of the office, but now that more than the majority of the employees of LMWD have withdrawn support from the Board of Directors appointed by the Leyte governor, I now have the courage to tell the public the pressing concern of the office,” Homeres said.

The LMWD employees association said they withdrew their support to the Petilla officials because the governor refused to implement the Collective Negotiation Agreement entered into by the management and workers in 2006.

Aldin Surpia, one of Petilla’s appointees, said in a radio interview on Monday they would continue to function as legitimate officials of the water district.

“Our lawyers have taken legal actions since the court has not yet make a final ruling on the management issue. We are still the legal and legitimate board of directors, but we cannot function because we are denied to enter the LMWD premises,” Surpia said.
Surpia and other directors have set up a temporary office at the Leyte Academic Center in nearby Palo town with the new manager and some employees loyal to the old governing board.

Such a decree mandated that a local government which has 75 percent of water consumers of a water district has the authority to manage the agency.

The city government said that based on the 2014 LMWD report, 67.5 percent of the water district’s consumers is in the regional capital.

As of December 2016, the total active number of service connections was pegged at 33,832 to include the towns of Tabon-Tabon, Sta. Fe and Pastrana.

Approximately 60,000 cubic meters of potable water is delivered to the LMWD service areas every day with the main bulk of supply coming from Jaro and Pastrana towns. (PNA)