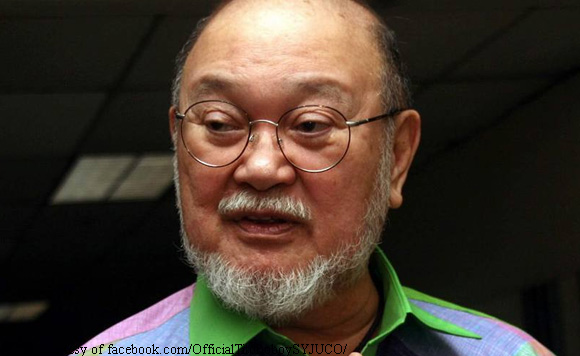 0 466
Share
Want more POLITIKO News? Get the latest newsfeed here. We publish dozens and dozens of politics-only news stories every hour. Click here to get to know more about your politiko - from trivial to crucial. it's our commitment to tell their stories. We follow your favorite POLITIKO like they are rockstars. If you are the politiko, always remember, your side is always our story. Read more. Find out more. Get the latest news here before it spreads on social media. Follow and bookmark this link. https://goo.gl/SvY8Kr

In a 12-page resolution issued on March 16, 2018, the Sandiganbayan 1st Division said it was “constrained, much to its regret,” to grant the motion to dismiss the case against Syjuco because of “inordinate delay”, which violates Syjuco’s right to a speedy disposition of his case.

The Sandiganbayan also ordered the lifting of their hold departure orders (HDOs) and the release of their respective bail bonds.

The case started when then Iloilo Rep. Syjuco and his co-accused tapped the Tawo Kag Duta sa Kauswagan Cooperative as a non-government organization (NGO)-partner for the procurement of farm inputs for Alimodian town.

Under the Department of Agriculture’s (DA) Ginintuang Masaganang Ani Program, the PHP5-million purchase was covered by the Agriculture and Fisheries Modernization Act (AFMA).

In the case filed by the Office of the Ombudsman, the public officials were accused of conspiring with private respondents Timoteo Salvilla, Edgardo Comoda, and Corazon Taladua, all of whom are executives of the NGO, when the municipal council passed a resolution authorizing the late Alimodian Mayor Bernardo Ambut to purchase the farm inputs.

The Ombudsman said the memorandum of agreement (MOA) entered into by Ambut and the NGO officials had violated the first MOA with DA, which had designated the local government as the implementing agency of the project.

It added the MOA deviates from the Commission on Audit (COA) requirements, which state that all NGOs need to be accredited by the agency before it can enter any MOA with the government.

Syjuco argued it took the Ombudsman almost 12 years to complete its preliminary investigation and file the case at the Sandiganbayan in November 2017 without justification.

The Ombudsman said Syjuco’s case took that long because it was consolidated with other fertilizer fund scam cases.

It added investigators only took three years and nine months to finish its investigation.

The anti-graft court said the probe of the case actually took three months short of 12 years, contrary to the claims of the prosecution.

“The court found no plausible explanation why the OMB (Ombudsman) needed these number of years just to determine the presence of probable cause to indict the accused-movants,” the Sandiganbayan resolution said.

“To the mind of the court, the process of merely verifying a prima facie case, certainly, will not require 12 years in the context of the circumstances of this case,” the anti-graft court said. (PNA)