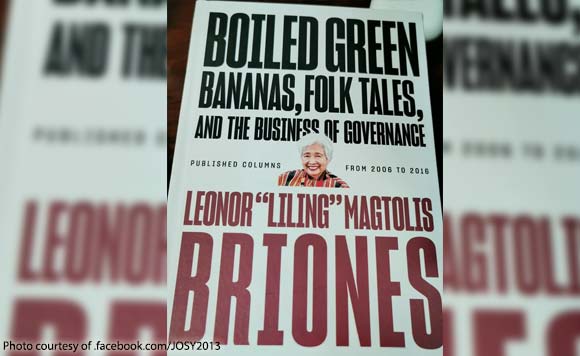 Josy Sy Limkaichong has been immortalized by a living legend.

The congresswoman of Negros Oriental received full credit for her great work as a politiko thanks to Education Secretary and professor emeritus Leonor “Liling” Briones, who graciously included her in a new book which she wrote and published in the middle of quarantine.

The politiko got a special shoutout in the book titled “Boiled Green Bananas, Folk Tales and the Business of Governance,” which catures Briones’ legacy as a public official in 10 years and under three presidencies.

“This book is one of Sec. Liling’s legacy to the Filipino people. I’m very honored to have an article about me as part of this anthology. The article was written at the time that I was being subjected to persecution by my political rival. I had no clue that she wrote about me and informed the public of who I was. I will never forget the kind words that she said not only about me but also about my father Julio Sy Sr. who recently passed away,” she said.

“In her long years in government service, there is no need to prove to anyone her greatness as a public servant. Her book, in itself is a testament to her character and competence,” she added.

Jerry Treñas gets another COVID scare