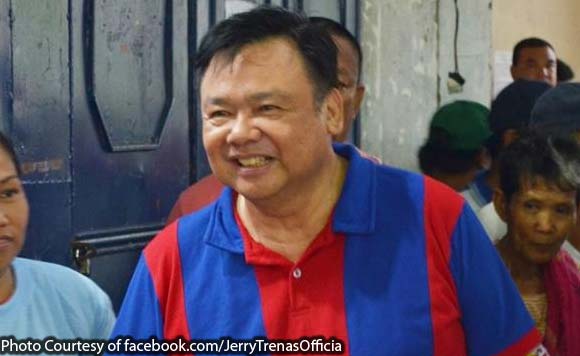 0 640
Share
Want more POLITIKO News? Get the latest newsfeed here. We publish dozens and dozens of politics-only news stories every hour. Click here to get to know more about your politiko - from trivial to crucial. it's our commitment to tell their stories. We follow your favorite POLITIKO like they are rockstars. If you are the politiko, always remember, your side is always our story. Read more. Find out more. Get the latest news here before it spreads on social media. Follow and bookmark this link. https://goo.gl/SvY8Kr

Rep. Jerry Treñas has promised to “freeze” real property taxes for “three years” in Iloilo City if he wins the mayoral race in the coming elections.

Upn his assumption of office, Treñas said he would also declare a moratorium on business permits, percentage taxes and other fees payable to the city government.

“We have to spur economic development through business activities especially in these difficult times. We have to elevate the city to the next uswag level,” the politiko said in a Panay News article.

“Uswag Iloilo!” is the famous battle cry of the Treñas, which means “Prosper Iloilo” in English.

For the city to prosper, the mayoral candidate said, “we have to keep the people healthy and well-equipped to earn a living.”

Treñas also pushes for the construction of a hospital for the poor and senior citizen and youth centers, as well as an upgrade of public markets and completion of drainage project.