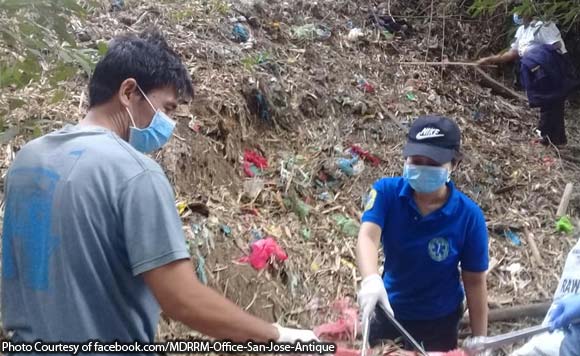 SAN JOSE DE BUENAVISTA, Antique — Environment Secretary Roy Cimatu is serious in pursuing the revival of the Bagumbayan Creek with the local government of San Jose de Buenavista in this province.

Dante Beriong, San Jose de Buenavista Municipal Council committee on environment chairman, in an interview Monday said the Secretary came to see for himself the Bagumbayan Creek, considered a dead creek and has become a dumping ground.

“Secretary Cimatu has directed over the weekend the Department of Environment and Natural Resources (DENR) local officials to look for the source of the water of the creek,” he said.

He said due to the human habitation and construction of several structures beside the creek, the natural source of water could no longer be found.

“Since there is no more water from the creek except only for the rainwater when it rains, the creek has now become a containment of garbage and human wastes,” he said.

Mayor Elmer Untaran initiated the massive cleanup of the Bagumbayan Creek that traverses three barangays which are Barangay 5, 8 and Malaiba over the weekend with around 200 student volunteers, barangay officials and residents.

“Secretary Cimatu wants to clean and revive the Creek because this is cleaning his own backyard being an Antiqueño and being consistent with his advocacy,” he said.

He said that Cimatu, who is married to an Antiqueña considers himself an Antiqueño, also wants to implement a comprehensive development of the area, including the engineering aspect, with a budget of PHP50 million from the DENR.

The fund will be used for the construction of the concrete wall along the creek to mitigate the indiscriminate dumping of wastes.

“As an LGU counterpart, I also suggested to Mayor Untaran that we will have steel matting installed at the Bagumbayan Bridge,” he said.

The steel matting at the bridge will prevent people from throwing their garbage from the top of the bridge.

He also said that there will be about four to six job orders who will be hired to maintain the cleanliness of the Bagumbayan Creek after the massive cleanup. (PNA)