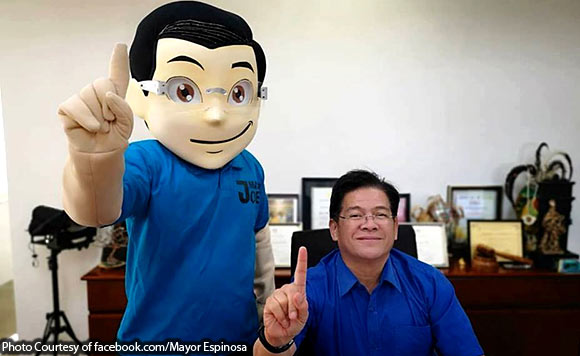 It’s just in aid of the anti-drug campaign, and not for reelection.

On this note, Iloilo City Mayor Jose Espinosa III insisted a mascot made in his image is the face of the city’s anti-drug campaign, and not anything else.

Dubbed “Tito Joe,” the mascot – which first appeared at the Iloilo City Hall last Aug. 22 – wears a blue-collared shirt and eyeglasses, similar to the mayor’s outfit.

But Espinosa said the mascot, which made appearances in various activities including the recently concluded 81st Iloilo City Charter Day Celebration, aims to provide an “easy connection” with the youth to avoid getting the drug habit.

The mayor, who is reportedly eyeing another term in the 2019 elections, added the mascot will tour different schools in the city to bolster the campaign against illegal drugs.

Meanwhile, Espinosa said the city government will start educating the children on the evils of drugs.