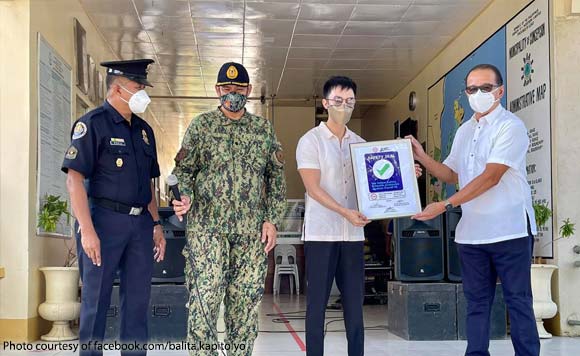 The municipality of Concepcion in Iloilo has received a Safety Seal Award from the Department of Interior and Local Government under the Safety Seal Certification Program (SSCP).

It’s the first local government unit (LGU) to get the certification, which recognizes the dynamic and effective programs and activities of an LGU unit against Covid-19, in the province.

The Safety Seal was given to Mayor Raul Banias on Monday by the Concepcion Municipal Inspection and Certification Team. (https://bit.ly/3hRmvGx)

Banias recognized the municipal government’s SSCP Core Team and barangay officials for ensuring that the minimum public health standards are observed by the public.

“The safety seal is an affirmation that the battle against the unseen enemy is real. Beyond that, it reinforces the existing efforts of the LGU by concretely laying down the fundamental safety protocols that are being enshrined in the Municipal Hall and are necessary to be replicated even in every individual’s home,” said Banias.

“We spent resources on this program borne out of our collective belief that having this in place in the Municipal Hall will positively reinforce our continuous advocacy for change of people’s behavior,” he added.