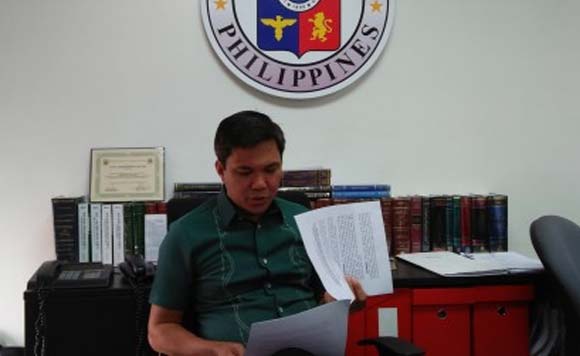 0 319
Share
Want more POLITIKO News? Get the latest newsfeed here. We publish dozens and dozens of politics-only news stories every hour. Click here to get to know more about your politiko - from trivial to crucial. it's our commitment to tell their stories. We follow your favorite POLITIKO like they are rockstars. If you are the politiko, always remember, your side is always our story. Read more. Find out more. Get the latest news here before it spreads on social media. Follow and bookmark this link. https://goo.gl/SvY8Kr

ILOILO CITY — The city government on Wednesday reiterated the policy banning the carrying of firearms inside the city hall.

This was stated by City Administrator Hernando Galvez following the apprehension of the body guards of Councilor Plaridel Nava by the Iloilo City Police Office (ICPO) on Monday, who were tagged as suspects in the killing of the councilor’s cousin.

“It is with regret that perhaps we have to remind them that they are not supposed to bring their firearms inside the city hall. Probably out of due courtesy because they happened to be the staff of a city official, thus they are not subjected to frisking,” Galvez said in an interview.

Galvez added that following the incident, security guards have been instructed by the Office of the City Mayor to be stricter, otherwise they will be sanctioned.

The security guards are located at both entrances of the city hall. A police is also assigned on the sixth floor, where the office of the SP is located, while other floors of the seven-story city hall have assigned police auxiliaries.

He stated that much as they would like to investigate the office of Nava, yet they have no authority because he is under the jurisdiction of the Sangguniang Panlungsod.

“The administrative authority is not with the mayor but with the Sangguniang Panglungsod, particular the Office of the Vice Mayor,” he said.

In a separate interview Tuesday, Vice Mayor Jeffrey Ganzon recommended that a detector be placed at the city hall so that firearms can be easily detected.

He also encouraged councilors, who legally possess firearms, to furnish the security guards with their permit to carry and other necessary documents.

“We have to secure the people and not just the public officials,” he said.

Meantime, Senior Supt. Martin Defensor Jr., director of the Iloilo City Police Office (ICPO), on Wednesday confirmed that a case for illegal possession of firearms have been filed against the de los Reyes brothers.

They were also charged for their participation in the Jan. 4 killing of Mercedes Nava, the cousin of councilor Nava. (PNA)