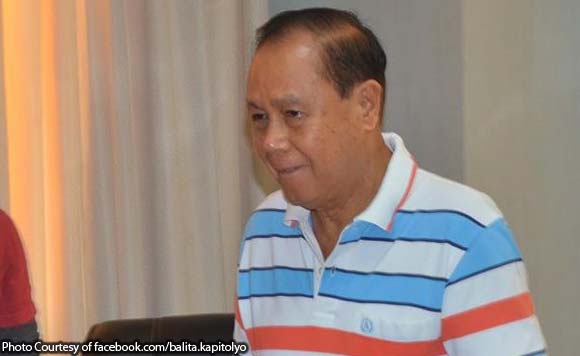 0 898
Share
Want more POLITIKO News? Get the latest newsfeed here. We publish dozens and dozens of politics-only news stories every hour. Click here to get to know more about your politiko - from trivial to crucial. it's our commitment to tell their stories. We follow your favorite POLITIKO like they are rockstars. If you are the politiko, always remember, your side is always our story. Read more. Find out more. Get the latest news here before it spreads on social media. Follow and bookmark this link. https://goo.gl/SvY8Kr

The Iloilo Provincial Risk Reduction and Management Council (PDRRMC) approved a resolution recommending the declaration of Iloilo province under a state of calamity due to the effects of El Niño.

Iloilo Governor Arthur Defensor Sr., as chairman of the PDRRMC, convened on Wednesday at the Iloilo Provincial Capitol Board Room the members of the PDRRMC including the Departments of Agriculture (DA), of Social Welfare and Development (DSWD), of Health (DOH), and of Trade and Industry (DTI), National Food Authority (NFA) and the Philippine National Police (PNP), among others.

Presently, the towns of Bingawan and Lambunao are under the state of calamity. The towns of Janiuay, San Dionisio, and Maasin are complying with the requirements to declare the same.

Ildefonso Toledo, Iloilo Provincial Agriculture Office chief, said 26, 000 out of the 117,000 rice farmers in the province are affected.

“The affected farmers already reached 20 percent of the population of 117,000 total farmers in the province,” he noted.

Affected population in the province therefore reached 130, 000 as the number of affected farmers are multiplied by five as the average number of members in the family.

Aside from the effects in the agriculture and population, a number of villages in the province also lack source of potable water.

Defensor requested PDRRMO to fast-track the resolution and “as much as possible submit to the Sangguniang Panlalawigan by Monday next week,” Bionat said.

The governor also asked for the resolution to be put on ‘urgent matter’ for the Sangguniang Panlalawigan to tackle during its regular session next week. (PNA)