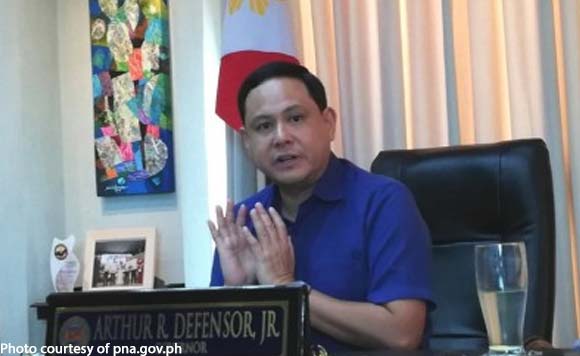 0 1,837
Share
Want more POLITIKO News? Get the latest newsfeed here. We publish dozens and dozens of politics-only news stories every hour. Click here to get to know more about your politiko - from trivial to crucial. it's our commitment to tell their stories. We follow your favorite POLITIKO like they are rockstars. If you are the politiko, always remember, your side is always our story. Read more. Find out more. Get the latest news here before it spreads on social media. Follow and bookmark this link. https://goo.gl/SvY8Kr

In a press conference , Defensor said he would take his oath of office before the president on Oct. 28 at the Malacañang Palace.

He said the RPOC was akin to the Regional Development Council (RDC), considered as the “highest regional policy-making body”.

“Councils are made primarily as policy-making bodies and their powers are recommendatory,” he said.

In line with the governor’s thrust on social justice, Defensor vowed to help maintain peace and order in the region as well as in the campaign to end the insurgency. “We will deliver what is expected of us,” he assured.

Last week, Defensor participated in the Visayas Island Group Summit with the Cabinet Officer for Regional Development and Security (CORDS) in Cebu City.

During the summit, Defensor noted that the whole-of-nation approach in ending insurgency requires the participation of all the local government units, even those that are not facing an insurgency problem.

Defensor said the provincial government also prepares for the creation of its PTF-ELCAC.

The province is waiting for the PDC’s approval of the resolution passed by the PPOC on Oct. 4.

Aside from RPOC, Defensor was also nominated as chair of the Regional Development Council. (PNA)