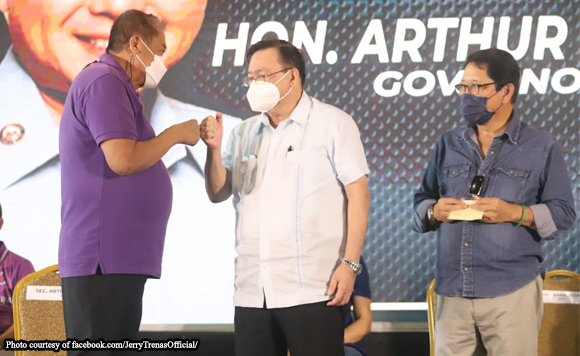 0 114
Share
Want more POLITIKO News? Get the latest newsfeed here. We publish dozens and dozens of politics-only news stories every hour. Click here to get to know more about your politiko - from trivial to crucial. it's our commitment to tell their stories. We follow your favorite POLITIKO like they are rockstars. If you are the politiko, always remember, your side is always our story. Read more. Find out more. Get the latest news here before it spreads on social media. Follow and bookmark this link. https://goo.gl/SvY8Kr

Iloilo City Mayor Jerry Treñas, Rep. Julienne Baronda, and Iloilo Governor Arthur Defensor Jr. recently received the livelihood programs and projects extended by the Department of Labor and Employment (DOLE) and the Department of Transportation (DOTr) to the city and the province to cushion the impact of the Covid-19 pandemic on the Ilonggos.

Treñas expressed his gratitude to Transportation Secretary Arthur Tugade and Labor Secretary Silvestre Bello III for their love and concern for the Ilonggos.

“We witness these Ilonggo beneficiaries to be given a chance to start over again and to see hope amidst these trying times. All these will not be possible without the love and concern of Secretary Bello and Secretary Tugade,” the mayor said. (https://bit.ly/3osPMtt)

Baronda also thanked the two agencies for their assistance during the pandemic.

“DOTr looked for ways to have (personal protective equipment) and specimens for RT-PCR test shipped since we didn’t have a testing center here at that time. It helped us organize sweeper flights for our stranded Ilonggos and to repatriate overseas Filipino workers,” the congresswoman said.

The DOTr, she added, dispatched the Philippine Coast Guard to transport locally stranded individuals and supplies.

For his part, Defensor thanked Tugade for the airport and port projects of the Civil Aviation Authority of the Philippines and Philippine Ports Authority in the province.

The DOTr distributed 25 electric tricycles or e-trikes to the city government of Iloilo after Tugade inked a Memorandum of Agreement with Baronda and Treñas.

A total of 38 beneficiaries also received bicycles under the Bikecination Livelihood Projects and free cellphone loads while 75 individuals benefited from “Trisikad” Project of the DOLE.