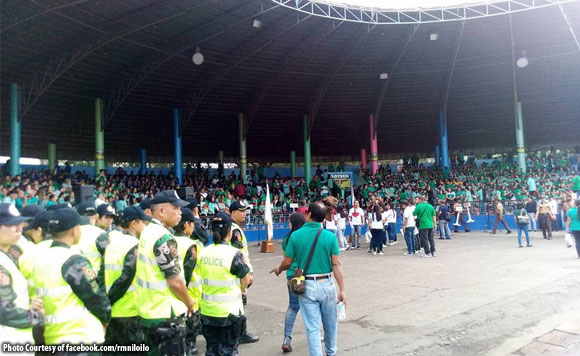 0 648
Share
Want more POLITIKO News? Get the latest newsfeed here. We publish dozens and dozens of politics-only news stories every hour. Click here to get to know more about your politiko - from trivial to crucial. it's our commitment to tell their stories. We follow your favorite POLITIKO like they are rockstars. If you are the politiko, always remember, your side is always our story. Read more. Find out more. Get the latest news here before it spreads on social media. Follow and bookmark this link. https://goo.gl/SvY8Kr

After serving as the venue of this year’s Dinagyang Festival, the Freedom Grandstand along J.M. Basa Street in Iloilo City will soon be demolished.

In its place will be the restoration of Sunburst Park, Iloilo City zoning administrator and architect Dolly Anne Zoluaga said.

Zoluaga said the demolition is to start after the Dinagyang activities, while the horizontal construction of Sunburst Park may be finished in six months.

But she said there will be a new Freedom Grandstand by 2019 – located at Muelle Loney Street, facing the historic Iloilo River.

The new Freedom Grandstand will be in a 2,600-square-meter property the city government acquired from Panay Railways. It is designed to accommodate 1,000 people.

Some P50 million was allocated by the city government for the new grandstand, which Zoluaga said is “flexible” enough to host events, including showcase of micro, small and medium enterprises products.

“It can be utilized every day, it is a sort of park, where the public can sit, with a better view of the river instead of the streets,” she said.

It said the Civic Center will include Freedom Grandstand, Customs House, Old PNR Site, Bureau of Fire Protection, Department of Trade and Industry, Commission on Audit, Office of the Congressman, City Hall, Plaza Libertad and its immediate vicinity, including nearby GSIS, San Jose Church and San Jose Parochial School.