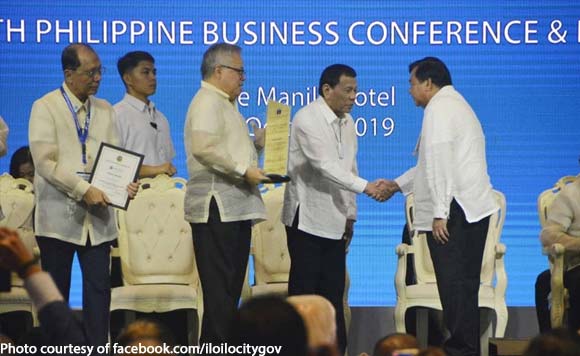 0 1,547
Share
Want more POLITIKO News? Get the latest newsfeed here. We publish dozens and dozens of politics-only news stories every hour. Click here to get to know more about your politiko - from trivial to crucial. it's our commitment to tell their stories. We follow your favorite POLITIKO like they are rockstars. If you are the politiko, always remember, your side is always our story. Read more. Find out more. Get the latest news here before it spreads on social media. Follow and bookmark this link. https://goo.gl/SvY8Kr

Iloilo City is the most business-friendly high urbanized city outside Metro Manila according to the Philippine Chamber of Commerce and Industry (PCCI).

“The award affirms investors’ confidence in Iloilo City. The city’s business-friendliness has also raised governance to the next level with active and strong public-private partnerships (PPP) in various priority programs and projects,” said Treñas.

According to him, the city government has initiated the reclassification of properties identified as new growth areas along and adjacent the coastal, circumferential and radial roads into industrial and mixed-use zones to make these ready for investors. (https://www.panaynews.net/iloilo-city-most-biz-friendly-in-ph/)

The slaughterhouse, public markets and waste-to-energy facilities have been opened for prospective players with the help of PPP Center, he added.

Treñas also noted the influx of Business Process Outsourcing companies in the city, generating jobs for the Ilonggos.

Iloilo City has been chosen by the Department of Tourism as destination for Meetings, Incentive travels, Conventions and Exhibits (MICE). The SM Group will build a 4,000-seater SMX Convention Center set to open in 2021.

The city hall opened its MICE Center and invested on promotions with P6-million supplemental fund this year and P28-million proposed budget next year.

It also entered into a 25-year usufruct agreement with Gaisano Capital Group for a 375-square meter site of a P38-million five-storey Iloilo City Action and Response Command Center along the Sen. Benigno Aquino Jr. Avenue in Mandurriao district.

The metropolis likewise generated the support of Megaworld Corp. for P8-million funding for resiliency undertakings.