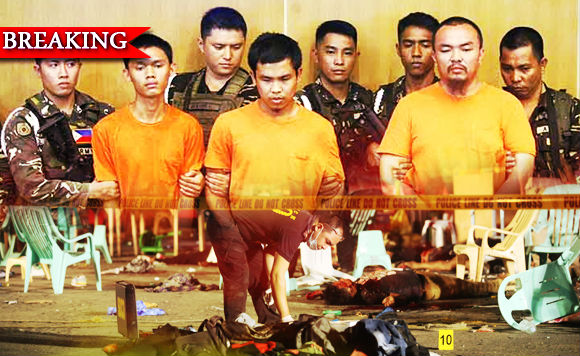 0 238
Share
Want more POLITIKO News? Get the latest newsfeed here. We publish dozens and dozens of politics-only news stories every hour. Click here to get to know more about your politiko - from trivial to crucial. it's our commitment to tell their stories. We follow your favorite POLITIKO like they are rockstars. If you are the politiko, always remember, your side is always our story. Read more. Find out more. Get the latest news here before it spreads on social media. Follow and bookmark this link. https://goo.gl/SvY8Kr

Three out of the 10 suspects who took part in the bloody Davao City bombing are now under custody, Defense Secretary Delfin Lorenzana announced Friday, October 7.

All three suspects were arrested during checkpoint operations in Cotabato City last October 4, he said.

The trio are allegedly members of the Maute Terrorist Group which is based in Lanao Del Sur. The are reportedly aligned with the Abu Sayyaf Group (ASG), which earlier owned up to the bomb attack.

Lorenzana said the attack was in retaliation for the government offensive last February which caused heavy casualties against the ASG and an August 22 operation which resulted in the arrest of several of the bandits.

Military units in Lanao Del Sur conducted an offensive against members of the Maute Terrorist Group after it attacked a detachment in Butig last February.

Seized from the suspects were a .45 caliber pistol, assorted bomb-making components, cellular phones and a video clip of the actual bombing.

The Davao bombing which took place last September 2 killed 14 people and injured 70 others.