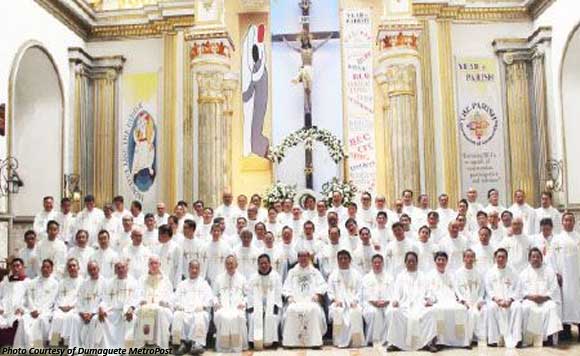 0 222
Share
Want more POLITIKO News? Get the latest newsfeed here. We publish dozens and dozens of politics-only news stories every hour. Click here to get to know more about your politiko - from trivial to crucial. it's our commitment to tell their stories. We follow your favorite POLITIKO like they are rockstars. If you are the politiko, always remember, your side is always our story. Read more. Find out more. Get the latest news here before it spreads on social media. Follow and bookmark this link. https://goo.gl/SvY8Kr

Count out priests in the Dumaguete diocese in Negros Oriental from the Philippine National Police’s retooled Oplan Tokhang anti-drug drive.

However, Cortes said his diocese will continue to help government fight the illegal drugs problem.

“No, I do not recommend it because it is not really the work of the clergy to do police work and to be involved in that kind of activity,” he said, stressing Oplan TokHang is the job not of priests but of law enforcers.

Cortes even cited rumors that another bishop had reprimanded a priest who had taken part in TokHang.

“But at the same time I believe that we should cooperate with the President in dealing with the problem with drugs,” he said.

The PNP suspended Oplan TokHang earlier this year, in the wake of a Senate hearing where rogue police personnel were linked to the abduction and killing of Korean trader Jee Ick Joo.