Gwen to Gov Davide: Don’t do any midnight deals or embarrass me 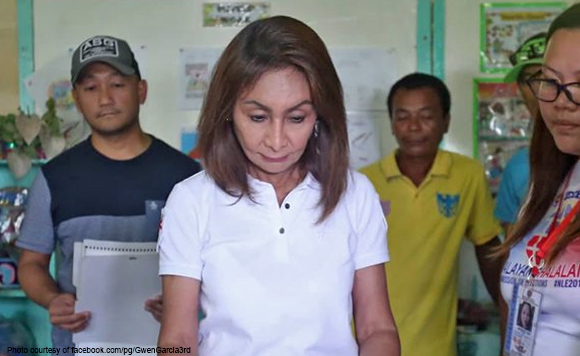 CEBU CITY – To ensure smooth transition upon assumption of newly elected officials on noontime of June 30, the governor-elect in Cebu province on Monday conveyed a formal letter to the outgoing governor, asking him to refrain from issuing midnight appointments and entering into midnight deals.

In her letter addressed to Governor Hilario Davide III dated May 20, 2019, Governor-elect Gwendolyn “Gwen” Garcia said current local government administrations are mandated “to prepare an effective turnover of responsibilities to incoming administrations to ensure continuity in local governance on June 30, 2019”.

The mandate is in connection with Department of the Interior and Local Government (DILG) Memorandum Circular No. 2019-39 dated March 13, 2019.

“Most importantly, I am formalizing my strenuous objection to the sale of any province-owned real estate property to the public,” Garcia added.

The incoming governor of Cebu was referring to the controversial 24.7-hectare Balili property in Tinaan village, Naga City which Davide wanted sold to the Naga City government for P100 million.

Garcia, who was governor of Cebu for three consecutive terms until 2013, said she will not recognize any possible midnight deal by the current administration.

“I am serving notice that any appointment and/or deals, contracts and
transactions entered into during the transition period will not be
honored by me,” Garcia said.

She informed Davide that she has designated lawyers Manolette Dinsay, Marino Martinquilla, Lito Astillero, and Frank Eduard Dinsay as members of her transition team.

She added that her transition team has “specific instructions to coordinate with your Local Governance Transition Team to guarantee a seamless transition of my administration” into the provincial capitol.

Copies of the incoming governor’s letter were also furnished to the provincial government’s bids and awards committee, human resources management office, and the DILG.

In an earlier statement sent to the press, Garcia said her reminders were meant to ensure smooth transition until she assumes office in noontime of June 30.

“Basically, the outgoing governor’s role from now on until the inauguration is merely just to prepare for the orderly transfer of authority to the incoming governor, Dinsay said in a statement. “He should not do anything to obstruct the policies of, or undermine, embarrass his successor.”

The office of Davide is yet to release a statement regarding Garcia’s letter. (PNA)