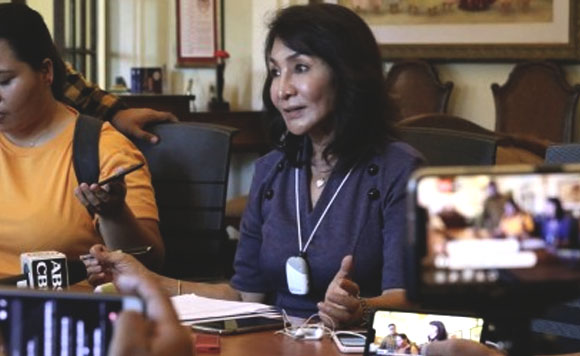 Cebu Governor Gwendolyn Garcia said the country was still a democracy and people should decide whether they would practice “tuob,” the traditional health regimen that she had endorsed to alleviate symptoms of the coronavirus disease (Covid-19).

This was Garcia’s response after various medical societies, including the Department of Health issued statements opposing the use of tuob or steam inhalation and debunking its benefits in fighting the virus.

“We stand by up-to-date medical evidence that steam inhalation has not been demonstrated to kill viruses, specifically the SARS-CoV-2 virus that causes Covid-19,” the medical groups said in a joint statement issued Thursday. (https://bit.ly/2YAl2uF)

“Because steam inhalation does not kill the virus and may cause potential harm, we cannot, in good conscience, endorse its use as a preventive or curative measure,” they further said.

The medical professional said that people who practice tuob should be careful and mindful of the first stages of burn injuries and appeal to the public to seek medical consult, despite doing tuob, if their symptoms persist or worsen.

Garcia responded that there was nothing to quarrel about in the doctors’ statement.

“I think, in so far as steam inhalation is concerned, of course, we must be very careful. We cannot just allow boiling water to pour all over us. But I don’t think I have heard of cases of people getting scalded unless you are careless,” she added.

While the provincial government was adopting the means recommended by experts to avert the infection such as physical distancing and practice of proper hygiene, the governor said that the public should be given the choice if they would want to practice tuob on top of the health experts’ recommended precautions.

“It’s my personal experience. It may be different from one person to another. I am just sharing this because we are allowed to do that, can’t we?” she also said.

“On the other hand, if people, who don’t have symptoms at all, or people who would rather choose to subject themselves to that because there are those who cannot afford to go to the hospital, I think this is still a democracy.”

In a separate statement, the Philippine Medical Association (PMA), the largest medical society, cautioned that the use of steam inhalation could only help spread the virus and not kill it.

“Contrary to Governor Garcia’s claims, tuob does not treat Covid-19. Worse, it may facilitate the virus’s aerosolization and contamination of nearby persons, objects, or surfaces. Equally as disturbing, it may foster a false sense of security and well-being that in turn may cause an infected person to spread the virus,” the PMA said.

They added that the governor’s move in promoting tuob is “counterproductive, irresponsible, and dangerous.”

Continue Reading
coronavirusDepartment of HealthGwen Garciatuob
0
Share
Politiko would love to hear your views on this...
Trending News
More Stories