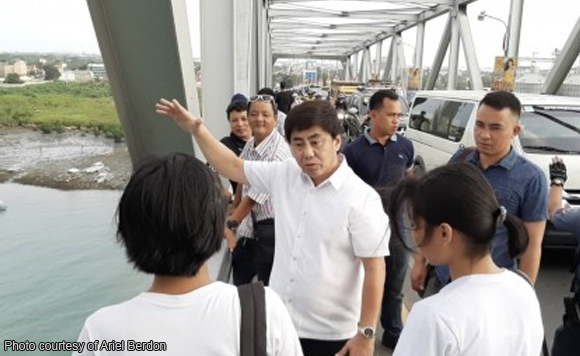 0 4,107
Share
Want more POLITIKO News? Get the latest newsfeed here. We publish dozens and dozens of politics-only news stories every hour. Click here to get to know more about your politiko - from trivial to crucial. it's our commitment to tell their stories. We follow your favorite POLITIKO like they are rockstars. If you are the politiko, always remember, your side is always our story. Read more. Find out more. Get the latest news here before it spreads on social media. Follow and bookmark this link. https://goo.gl/SvY8Kr

LAPU-LAPU CITY, Cebu – Governor Gwendolyn Garcia on Thursday night ordered the review of the plan of the bridge management body to ban bicycles from crossing the old Mactan-Mandaue Bridge and Marcelo Fernan Bridge.

Garcia, who chairs the Mactan-Cebu Bridge Management Board, reconsidered the earlier plan to ban bikers traversing the two bridges “in response to the public’s objection.”

“Expect an announcement of a clear-cut policy soon,” Garcia said in a message sent to media.

On Wednesday, the bridge board directed a “complete ban” on bicycles from plying the bridges, which was supposed to start on Thursday, Sept. 2.

The bridge board came up with the measure during the Sept. 10 meeting, as a means of deterring suicide incidents reported in both the old bridge and the second bridge.

Garcia said the bridge was not built for bikes.

The closure of the bridges for bikers was meant “to make it as difficult as possible” for individuals who wish to commit suicide by throwing themselves off the bridge.

However, Roland Remolino, head coach of a triathlon group in Cebu whose members often pedal on long rides as part of their training, said the bikers passing the bridges are “responsible bikers” who have proper manners on how to use roads.

Mayor Junard “Ahong” Chan of this city also opposed the total ban of bikers on the two bridges, saying that many Mactan island residents ride their bicycles to and from home, traversing the bridges.

Earlier, Chan voiced out the negative effect of the bridge board’s decision to impose single-sidewalk and curfew policy on the two bridges, stressing that residents of this city also walk their way back home from work or school.

The two bridges are now equipped with close-circuit cameras, with the Lapu-Lapu City and Mandaue City Police Offices deploying their policemen to watch the activities in the bridges 24 hours a day.

The mayor said the 24/7 duty of the policemen was found effective last week when the CCTV cameras monitored a teenager sitting against the railings of the old bridge while sobbing in tears.

The plan of the teenager to end her life was deterred due to the round-the-clock monitoring and presence of policemen in the areas, Chan said.