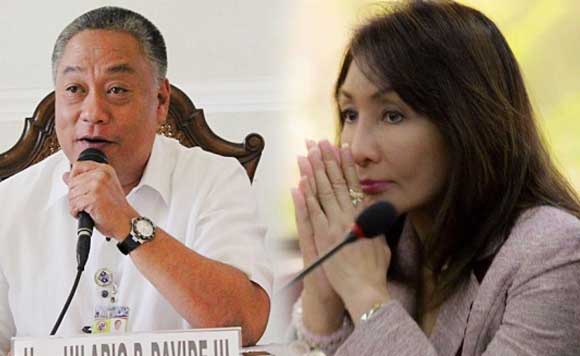 0 977
Share
Want more POLITIKO News? Get the latest newsfeed here. We publish dozens and dozens of politics-only news stories every hour. Click here to get to know more about your politiko - from trivial to crucial. it's our commitment to tell their stories. We follow your favorite POLITIKO like they are rockstars. If you are the politiko, always remember, your side is always our story. Read more. Find out more. Get the latest news here before it spreads on social media. Follow and bookmark this link. https://goo.gl/SvY8Kr

Garcia said she and Binghay filed the case last March 26, now pending before the Regional Trial Court in Toledo City.

“We filed the case in answer to the call of thousands of Cebuanos who are outraged with this project, now widely known as ‘Torre ni Davide’ (Tower of Davide),” said Garcia in a press conference at Tsay Cheng Chinese Restaurant on Thursday here.

She said most of the people she met during her sorties in the different towns of the province expressed indignation, questioning why such project is being prioritized over vital and essential projects, such as asphalting or paving of dilapidated provincial roads, improvement of health services in district hospitals, and water systems in the barangays.

Most importantly, however, Garcia said she filed the case because the governor was not authorized by the Provincial Board (PB), or Sangguniang Panlalawigan (SP), to enter into a contract for the construction of the 20-storey commercial building.

Garcia claimed the governor violated Section 22 of Republic Act (RA) 7160, otherwise known as the Local Government Code, when he signed a contract agreement with WT Construction Inc. for the project.

Section 22 of RA 7160 provides that “unless otherwise provided in this Code, no contract may be entered into by the local chief executive in behalf of the local government unit without prior authorization by the Sanggunian concerned.”

Earlier, Davide and provincial administrator Mark Tolentino requested the SP for a resolution authorizing the governor to sign a contract with WT Construction, which the Board denied in its Resolution No. 162-129 dated Jan. 21, 2019.

Moreover, Garcia’s younger brother, former congressman Pablo John Garcia, who was with her at the press conference, said the implementation of the project is also in violation of the National Cultural Heritage Act of 2009, which prohibits any construction undertaking or real estate development in historical landmarks.

The violation, he said, was already pointed out by National Historical Commission of the Philippines chairman Rene Escalante in a letter dated March 2, 2019 to Tolentino.

In said letter, Escalante asked the provincial government to forgo the project inside the Capitol compound because the building is “too high” and may deform the look of the Cebu Capitol, which was declared as a National Historical Landmark in 2008.

In a separate interview, Davide said they are prepared to answer the case as they have strictly observed the rules of procurement in all aspects of the project.

“We are prepared to answer their allegations, but we will answer at the appropriate time as soon as we receive the complaint,” the governor said. (PNA)